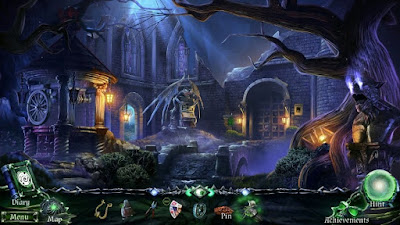 Demon Hunter 3 has a proud pedigree to live up to. While the first two games in the series weren't the best HOGs I've ever played, they were by far the most endearingly strange. The first game will always hold a place in my heart due to its use of a photo of Jeffrey Combs as one of its villains, as well as introducing me to my spirit animal, Scarecrow Dentist. The second game will be remembered forever as having perhaps the most proactive villain in the history of HOGs, who had a penchant for both poison and rocket launchers, which exist at the exact opposite ends of the spectrum of possible murder weapons. While DH3 may not be able to compete with its predecessors in terms of raw oddness, it's a better game than either of them, with great puzzles and a plethora of HOSs.

Also the picture of Jeffrey Combs makes a brief cameo. 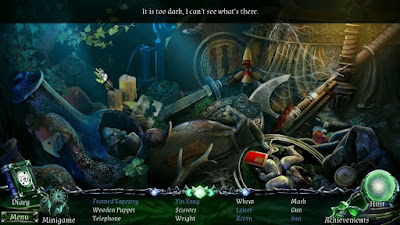 Barely at all. The developers at Brave Giant have found themselves a perfect setting for object searches - a crumbling house situated just above a decrepit church that hides the entrance to a secret underground kingdom. I seriously don't have the slightest idea where this game is set. The previous two took place in America, but this title just goes full-on fantasy with its setting, having the player traipse from a modern setting where cops are investigating a murder all the way to a pseudo-medieval village. This wouldn't necessarily be so peculiar if the main character's adventure was taking her to some bizarre and far-off location - Demon Hunters can go where they like, of course - but she's called in by the police officer from the first game, which suggests that things are once again taking place in America. Perhaps I was a little hasty when I suggested this game wasn't as odd as the previous entries in the series.

Demon Hunter 3 runs the full gamut of HOS types. There are construction scenes, 12:1 scenes, silhouettes, even uncovering screens! While I'm fine with the genre-wide move towards HOPAs, in which developers focus more on the graphic adventure portions of their games, and backburner the hidden object scenes to a certain extent, it's nice to see a game really focus on its hidden object scenes, throwing more than a dozen at the player, with never more than a few minutes of gameplay separating each new HOS. They're all extremely well-designed, and a pleasure to play. Other than a single technical issue, that is. The 12:1 screens have the traditional 'white text for visible items, blue text for items which need to be found or made' structure. This generally accurate and well-handled - even the morphing items have their names change colour when they transform. The problem comes with the silhouette screens - they also feature hidden and transforming items, but there's no signal offered to let the player know which items can simply be found, and which are double-hidden. This adds a needless level of frustration to what was otherwise a perfectly-constructed set of puzzles.

Again, setting is king here - the ruined church and ancient village are perfect places to find elaborate locks, statues that need to be reassembled, and piles of items to search through. A lot of the standards show up - spinning triangle mosaic, gear strings, and marble sorting all make an appearance. The most interesting and notable puzzles are two imports from the Grim Legends series - the first are the storybook puzzles that do such a great job of offering backstory while keeping the player engaged and searching for mysterious symbols.

The second, and far more intriguing borrowed puzzle is the 'psychic battle' from The Dark City. From time to time the game's main character will come across a demonic force, and she'll have to break through their mystical barriers by finding symbols they're incapable of defending against. It's a great little minigame, and I was happy to see it, but its inclusion is more meaningful than developers reusing a successful invention. It, along with some plot details I won't divulge here, suggest that Demon Hunter and Grim Legends are set in the same universe, and fans of both can likely expect a crossover soon.

Speaking as one of those fans, this is incredible news.

Demon Hunter 3 may not be a bubbling cauldron of madness the way the first two games in the series were, but it's a bona fide success, with great puzzles, beautiful HOSs, and a story that ties up all of the last two games' loose ends, while promising more intrigue to come. Demon Hunter really feels like a Brave Giant game, and deserves its place alongside that developer's best titles.

I just realized that I made it through the entire review without mentioning the huge improvement they've made - there's now an indicator onscreen to let players know if there are collectibles to be found on a given screen. If it wasn't a solid enough game already, DH3 goes out of its way to strip all frustration out of trophy hunting!

Demon Hunter 3 can be purchased here!

Want to see the playthrough which led to this review? The first video is below!
A review copy of this game was provided by the publisher!
Posted by The Hidden Object Guru at 00:46