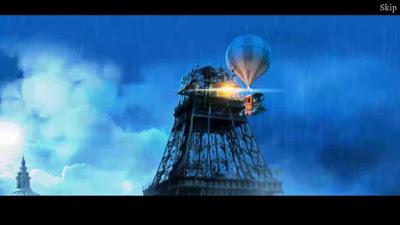 The year is 1888, and archaeologists have discovered an amazing relic - the actual thread Theseus used to find his way back out of the Labyrinth after slaying the minotaur! Naturally, the discovery draws the attention of an evil cult of minotaur-worshippers, and it's up to the player to avoid their schemes, find the hidden isle of the Greek Gods, and prevent the resurrection of a certain bull-headed monster who has already been mentioned twice in this paragraph, and a third would probably be excessive. It's a crash course in mythological monsters packed alongside some great art and solid puzzles.

Now, on to the Hidden Object Criteria! 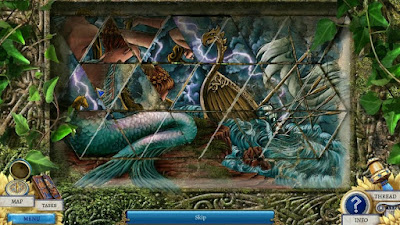 It's not a problem in the least. Logic and style are the buzzwords underlying the game's HOS design. While the screens themselves aren't the most intricate or beautifully-drawn, they fit perfectly within the game world. Whether the player is exploring ancient ruins or a cluttered blacksmith's shop, every time they're asked to search for hidden object, it's in a place that make perfect sense. The screens are also completely fair. No colour or gravity cheating here - they even go easy on asking players to find images of items rather than the items themselves. The end result are screens that are perhaps a little on the easy side as HOS go, but always a blast to play.

Almost completely. This is where the game really shines. While a couple of 12:1 screens make an appearance, by and large the player only has mini-puzzles and construction screens to work with, and wonderfully-built ones at that. The mini-puzzles are especially well thought out - the player is told how many 'interactions' are left before they can find the item they're looking for, and then they simply have to figure out which items on the screen can be used to pry open one container to find a secret emblem to open a safe to grab a knife... when these screens are well-done, they encapsulate the whole graphic-adventure experience in tiny slices, and this is a perfect example of developers knowing what they're doing.

There are many familiar puzzles in this one - sliding blocks, chain linking, a maze to run marbles through. They probably make more sense in the context of this game than any other. Set in the millieu of the Greek Pantheon, Endless Legends has the player at one point traverse the labyrinth crafted by the actual Daedalus - so of course there are going to be some elaborate locks lying around. This is where that concept originates from, after all. The game splits up its journey into a series of 3-4 screen areas, each one involving a different mythological creature which needs to be helped or defeated, and this contained design helps keep the player focused on the task at hand, as well as moving the story along at a good clip. There's never a moment for the player to wonder what the dozen items in their inventory for, and it's almost inconceivable that anyone would ever have to check their map to see where to go next.

With great production values, an intriguing story, and wonderful puzzles, The Minotaur's Curse is a great jumping-off point for a potential series. This trip into antiquity feels fresh - while ancient evil returning to bedevil a chosen one may not be the most original premise, the developers manage to find new twists to the story with a surprisingly faithful presentation of Greek mythology, along with some surprising new gameplay mechanics. The game's breakneck pace ensures that players will constantly have new puzzles and HOSs at them, turning it into a thrilling ride which doesn't let up for the whole two-hour playtime.

A review copy of this game was provided by the publishers.
Posted by The Hidden Object Guru at 01:14