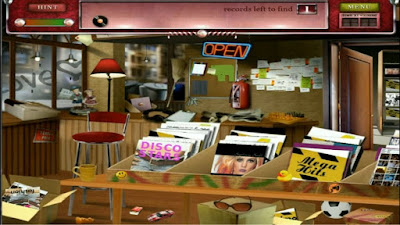 Yes, there's a Pretty in Pink hidden object game. I'm as surprised as you are. Based on the John Hughes film of the same name, Pretty in Pink chronicles the last few weeks of high school for Andie, a girl from the poor part of town, as she starts dating a rich kid, causing upset in both of their social circles. The game follows the movie's plot to a remarkable degree of fidelity, presenting key moments from story in the form of static cutscenes, with renderings of the various characters popping up on screen while text lays out their dialogue. While I'm fairly used to seeing popular stories adapted into the HOG medium at this point, there's something oddly refreshing about the lack of alteration featured in this game - the developers simply show a scene from the movie, then ask the player to click on some items or solve a puzzle before moving on to the next scene. 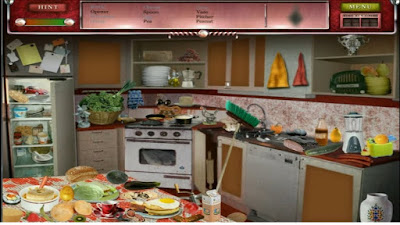 It's fairly dire. Not since Civil War have I played a game with such a random assemblage of nonsense thrown onto each of the game's screens. No matter what the setting is - Andie's bedroom, a school library, or the hall where the prom is taking place, there is no location that is safe from having miscellaneous garbed placed on every surface. The developers put in a passable amount of effort in making sure that the various items at least fit in the location logically - a kitchen will have largely food-based items, while a club will be littered with clothing, drinks, and the like. Every screen will also have a good amount of random ephemera strewn about for no good reason - this isn't a modern HOG, and boy, does it show.

Strangely, they absolutely are. While I've often joked about the justification for 12:1 screens being that the character must clean up an area in order to find the particular item they're looking for - Pretty In Pink uses this as the explicit motivation for many of its screens. In the world of PiP, there a lot of messy rooms, and a lot of people who are super-responsible about cleaning them up. Whether it's tidying up Harry Dean Stanton's messy kitchen, cleaning up after a kegger in the rich kid's house, or shelving records at Annie Potts' store, the game always makes sure that players understand why they're being asked to search out and click on various items. That's not something a lot of HOGs can claim.

Just as the HOSs are slotted very well into the story, the developers have framed the puzzles largely as representations of characters' thoughts or emotions. There are 'spot the difference' puzzles based around noticing the difference between fantasy and reality, and a few jigsaw puzzles that represent characters figuring things out. None of it is the least bit subtle, but fundamentally works as a logical way of adding gameplay to a tale which - at first glance - couldn't seem a less likely jumping-off point for a video game.

While Pretty in Pink managed to impress me with how completely it managed to fit the film's story into a HOG, it's not without its flaws. The graphics are as rough as one would expect from a decade-old game, and I had trouble getting it to run fullscreen in Windows 7 - which led to a workaround where I had to reduce my monitor's resolution so that the items would be at all identifiable onscreen. It's still a quality game, despite the technical issues - and even has a bonus feature that fans of the film will appreciate: both of the film's endings are included. Pretty in Pink's ending was famously reshot to change who Andie ended up with, but the developers of the game have decided to put that decision in the player's hands - just another way that they demonstrate how dedicated they were to making the best possible version of a Pretty in Pink HOG, which this almost certainly is.

Posted by The Hidden Object Guru at 00:59