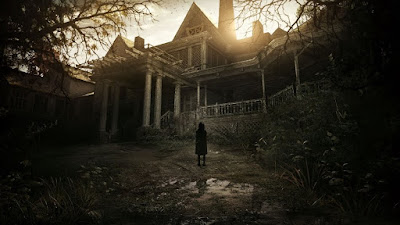 Hearing that RE7's beginning hour had updated for the last time, I decided to check out the final version before the game launches in January. Especially since they'd added the long-promised VR mode!

You can check out the video of my playthrough below, and then please join me further down for some thoughts on the subject of VR control schemes. Specifically, how frustrating it is that developers force a strange, immersion-breaking 'turn using your head' system into their games.

Whether it's Here They Lie, Robinson's Journey, or now Resident Evil 7, developers are addicted to the terrible idea that people want to always move in the direction they're looking. They trouble themselves creating bizarre and jarring movement systems all designed around the premise that people should always be looking at the place they're walking towards - and they're all awkward.

I'm not sure just how they've gone down this route, asking players to turn in 30-degree pie slices, constantly have to recenter themselves, or be unable to glance to the side or backwards without running into a wall. Not only are these systems awkward to play, run counter to the natural experience that VR is supposed to be providing.

How is it so difficult to understand that my controller should be in charge of my character's body, while  my head is free to look wherever I want? Developers understand this just fine in vehicle games - and as a result Battlezone plays like a dream - I can move my tank and aim the cannon in any direction I like, while glancing around my environs to my heart's content. The moment I'm asked to step out of a tank and move into the FPS realm, however, despite the fact that I'm holding a controller in my hands and am perfectly comfortable using it, the developers decide that I can't be trusted to look around freely while walking straight down a hallway.

Perhaps they think that this is some sort of hedge against motion sickness, but I have to say that it's had the opposite effect for me. The only times I've ever been close to queasy playing a VR game is when the game world ceases to obey the normal operations of the physical world it's simulating. Specifically, when the controller pressing forward suggests I should be walking in a straight line, only to have the slightest turn of my head make my course go wobbly - this isn't simulating how people walk, it's quite the opposite, and it's a terrible to a solution to a problem that didn't exist.

Resident Evil 7 doesn't come out for another month - I hope within that time the developers see fit to offer a 'classic FPS' control scheme in the game. Move with the left stick, turn with the right stick, and give me the freedom to look and aim independent of what my body is doing.

Is that really such an ask?
Posted by The Hidden Object Guru at 00:09