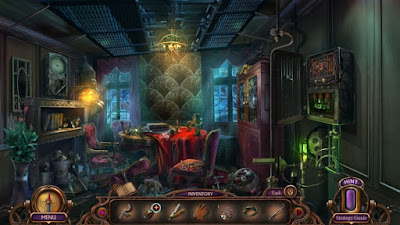 There's another mystery for James and his player-controlled sidekick to solve - this time it concerns missing intellectuals at a haunted hotel! The twist? This time the hotel is supposed to be haunted! That's right, in one of the series' more audacious premises, a man with the warning-bells name of 'Abraham Shadowy' has built a hotel designed to terrify its thrill-seeking guests. The various monsters and ghosts are all carefully crafted machines that couldn't possibly harm anyone. Unless, of course, Shadowy were to attempt to gild the lily and purchase a genuine Egyptian sarcophagus - complete with cursed mummy - and store it in a secret room in the basement. But what's the worst that could happen? 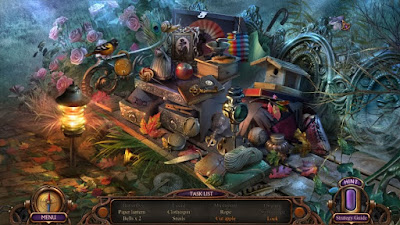 It's not too bad. This once again comes from Elephant Games, who, as always, do a stellar job of building plausible HOSs. The setting here - a dilapidated hotel under assault by paranormal forces - is a perfect setting for piles of detritus to naturally appear. There is a surprisingly large amount of clutter in the inventory bar, however. The developers have made the odd choice to load the player down with nearly a dozen items early in the game, then reliably give them new ones just as quickly as the old ones are used up. It's a little frustrating to have to scroll back and forth through the inventory every time I want to try a solution to an item-based puzzle, or dig out a particular amulet to open a lock. This kind of bloat doesn't add anything to the experience, merely stretches out the least interesting part of the game - inventory management.

The HOS are few and far between in this game. The developers were clearly more interested in having the player assemble machines, disarm traps, and run through a course of the standard puzzles. The HOSs which do show up are generally 12:1 affairs, which at least means a bare minimum of work was put in to explain their presence. That's not to say the lack of HOSs cripples this game - it's a strong narrative with well-integrated puzzles, it's just that it's weighed quite heavily towards the puzzle side of the 'Hidden Object Puzzle Adventure' genre.

This really is a solid story from beginning to end. While it's the weakest of the '20s detective Haunted Hotel trilogy, that's only because Eclipse and Death Sentence are both such amazing games. The fundamentals are all here, however - jump scares, gorgeously drawn environments, puzzles that perfectly suit the plot and location. The game's fundamental problem is that the story is just too convoluted for its own good, without any of the fun which could have been brought to the premise. Just imagine - a man builds a fake haunted hotel and accidentally decorates it with a legitimately haunted artifact. That's a premise ripe for comedic exploitation. Yet the game has the same grave and serious tone that is the hallmark of the rest of the series - which doesn't suit it at all.

Oddly, it's only in the bonus chapter included with the Collector's Edition that things start to feel more on model. Apparently the hotel had, previous to its purchase by Mr. Shadowy, been the site of a tragic love affair that ended in madness and death. This is the kind of story that the art and storytelling style are best at telling, and this final 45-minute chunk of gameplay winds up being more satisfying than the entirety of the main game.

If Ancient Bane weren't part of Elephant Games' Haunted Hotel series I probably would have had lower expectations for it. I might have let the developers get away with a meandering plot and mediocre villain. Its pedigree, however, forces anyone familiar with the series to demand better. While a perfectly functional and eminently playable HOG in its own right, Ancient Bane just isn't up to the level of the rest of the series, and as such is the one inessential entry in it since Elephant Games started making them.

Curious about the playthrough that led to this review? It starts below!

Posted by The Hidden Object Guru at 00:46