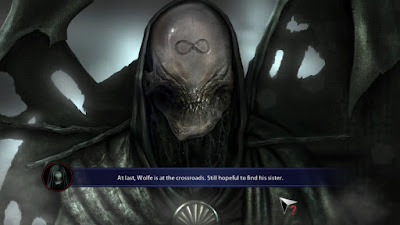 This is, by leagues, the most intricate and deep HOG I've ever encountered. Partially that's due to its remarkable running time - the game's 'season' is broken up into four hour-long 'episodes' - although simple running time has little to do with the game's successes. After all, Evil Pumpkin dragged on for hours and hours with almost no content to it at all. What so impresses about Adam Wolfe is the fact that each one of its chapters is a fully fleshed-out story with its own cast of characters, as well as a beginning, middle, and end.

Players take on the role of Wolfe, a supernatural detective determined to solve the mystery of his sister's disappearance - as well as help out the other three people who need his expertise in their own storylines. Each one of the stories is a fully satisfying experience, and had the developers been interested in doing so, they could have tacked a few extra puzzles and HOGS into each and sold this as four different games. Instead, they've released one of the most dramatically satisfying HOGs ever made. 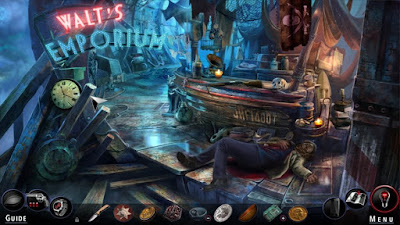 Not at all. Mad Head Games have gone above and beyond to create HOSs that look completely believable. Obviously aware that this is an issue in poorly-produced HOGs, they set all of the hidden object scenes in plausibly cluttered locations. Adam goes digging through an old box of personal effects, a bartender has the player searching through a packed shelf, there's even a child's treehouse absolutely stuffed with toys. All of the screens are beautifully drawn, with items hidden completely naturally. There's no cheating of any kind, yet the screens are never pushovers - great care was obviously taken to ensure that the items to be located match the art style of their surroundings. This is as good as hidden object scenes get from a presentation standpoint.

Again, this is a perfect example of developers going the extra mile and showing how much they respect their audience's suspension of belief. While the game doesn't have a ton of HOSs - there are just a few in each episode - the majority of them are fully integrated into the plot. There are some narrative screens, in which the player is asked to find a series of items as part of a story being told, justified lists, where they have to find puzzle pieces under a series of items, and plenty of mini-puzzles, that have them finding and using a series of items all within and intricately-designed screen. There are a couple of basic 12:1 screens as well, but by and large Adam Wolfe's HOSs are some of the best-integrated ones around.

Incredibly well. Adam Wolfe offers a huge variety of environmental interaction, standard puzzles, and action sequences, all of which fit perfectly within the game world. The main character operates in a strata of society full of ancient secret orders, scheming demons, and otherworldly threats - of course he's going to have to open a few puzzle boxes here and there. Beyond the standard puzzles, however, the game has a few interesting mechanics of its own to offer. Most notable is the 'time rewind' mechanic, in which Adam arrives at the scene of a crime and has the ability to look backwards to the moment of tragedy - simply move a few items so that the the physical space has been reset, and the player is treated to a rotoscoped re-enactment of the action.

What truly impressed me, though, was how well the game managed to integrate action sequences into the gameplay. So many games stumble with fistfights and gunplay, but Adam Wolfe pulls it off with aplomb. There's frantic tapping, some symbol matching, and even a two-axis aiming sequence - and they all work just fine. This is a more intense, action-packed HOG than I'm used to, but it never asks too much from its player, managing to remain an accessible casual experience even when things get violent. And get violent they do - Adam shoots a surprisingly large number of people over the course of the game, yet another one of its standout points. The game is so well-built that I even enjoyed the card game I played against a supernatural foe at one point - and I tend to skip adversarial puzzles because of my well-established history of being terrible at them.

From beginning to end, Adam Wolfe is operating at the absolute peak of the art of HOG design. Compelling stories, great gameplay, challenging yet fair puzzles - this is as good as casual adventures get, and is an absolute must-play for any fan of the genre. If I was forced to find a single complaint about Adam Wolfe, it's that at the end of the game the story isn't completely over. All of the mysteries have been solved, but there's a fairly substantial dangling plot threat that might frustrate some. I tend to look at it as a good sign - it suggests that the developers intend to make more Adam Wolfe games - which, if this one is anything to go by, would be a fantastic result.

Posted by The Hidden Object Guru at 01:33