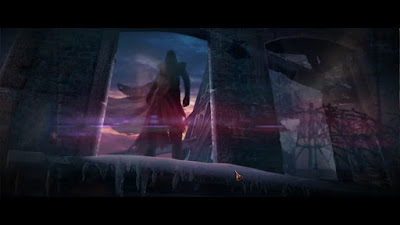 After the strange way Haunted Hotel: Eternity wrapped up, with its Mystery Trackers crossover ending and history-altering bonus episode, I had no idea what to expect from Phoenix. Would it follow the same character from the previous game, as the previous trilogy of games had? Or would it depart from the detective millieu entirely and go off in a new direction?

The former - this is the second game in the third Haunted Hotel miniseries, following up on the story of Eternity as the detective from that case goes to solve a seemingly unrelated mystery, only to have a couple of familiar faces pop up again. But to say any more would spoil the twists, so let's move on to the hidden object criteria! 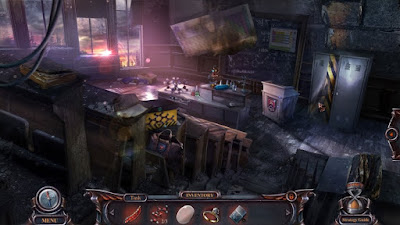 Not at all. This is, once again, a title from Elephant Games, who make it their business to build great-looking HOSs. The game is set at a hotel built atop the ruins of a badly-damaged university which had been attacked by an arsonist some years prior - which creates ample opportunities to justify HOSs, be they in a messy hotel room or a literal pile of burned rubble. This is one of the series' better locations, and the artists have outdone themselves, creating an isolated and foreboding locale, one where the frequent appearances by a nefarious masked figure (who bares more than a passing resemblance to Arkham's Scarecrow) never fail to unsettle.

Almost every type of HOS is on display here. There are - in descending order of logic - construction, puzzle, valid list, 12:1, silhouette, and memory scenes. It really runs the gamut, throwing everything at the wall with mixed results. The valid lists - in which the player is given a list of twelve items to move, only to discover that each one has a relevant item hiding behind it - are a great way of making the default screen feel relevant within the game world. At the opposite end of the spectrum are the 'memory' scenes, which have replaced 'placement' as my least favourite type of HOS. For those who haven't suffered through these screens, imagine playing a game of memory - where two items must be matched - without having any idea where the items were located. Sound frustrating? It is - players are presented with a screen and asked to click randomly on items until they find one which slides aside, revealing one of the matching items behind. Then they have to remember which item was behind what random piece of scenery while they resume clicking all over the screen in the hopes of finding another random item. It's a capricious and annoying type of HOS, forcing players to do the very thing - clicking randomly around the screen until something happens - that is anathema to how HOGs are supposed to be played. These scenes inclusion is the worst thing about the game, but luckily there aren't too many of them.

Amazingly well. This is one of the strongest stories in the Haunted Hotel series - a tale of ghostly arsonists with secret agendas, of love and betrayal and surprising revelations. I won't  spoil any of the details, but suffice to say the developers have done a great job not only with the story, but with selecting puzzles and HOS types that fit the narrative perfectly. How well done was it? There are even a couple of reflex games/real-time puzzles that I didn't mind in the least, which is almost never my preference when it comes to HOGs. Here, though, they worked.

Which brings me to a final question before ending on a full-throated recommendation. What's going on with James? Playing these games vastly out of order (I started with 11 and then jumped back to 1) caused me to miss a pattern, so it wasn't until James showed up in this game that I realized that the detective who'd been nearly beheaded in Axiom was the same man who'd been calling the shots in the previous trilogy. But those games are set in the 20s, and this third miniseries is set in the 70s. Is it just a cute nod by the developers, or is this supposed to be the same man? I must know the answer, and would love to hear any theories or evidence that anyone may have come across.

Seriously, though, Phoenix is a top-notch HOG, so high-quality that even the appearance of a couple of my least-favourite types of HOSs couldn't sour me on the game. Amazing presentation, great story, wonderful puzzles, this is a great title through and through.

Curious about the playthrough that led to this review? It starts below!

Posted by The Hidden Object Guru at 00:53