Enigmatis: The Ghosts of Maple Creek 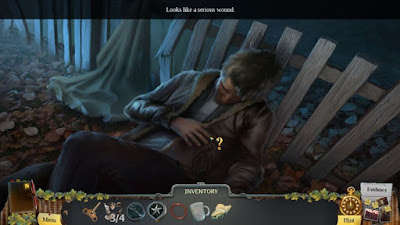 I've played more than a few bleak hidden object games, but few are as unrelentingly dark as Enigmatis: The Ghosts of Maple Creek. Opening in the aftermath of a storm of biblical proportions, it follows a detective with a suddenly-spotty memory as she attempts to piece together her investigation into a disappearance in the titular town. The amnesia angle is a but of a strange conceit - things could well seem anticlimactic, since the main action of the plot has already taken place when the player starts - interviews have been conducted, and evidence collected. The developers are attempting to elide over the slower aspects of detective fiction, and just cut to the thrilling climax of the plot, with all the running through storms and fistfighting with serial killers.

Despite a few hiccups, this strategy works pretty darn well. 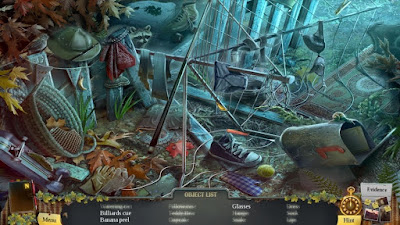 Barely at all. Yes, every surface is covered with piles of random nonsense, but the developers have come up with a perfect explanation for the terrible condition of this small Vermont town - it's just been struck by a once-in-a-century storm! Honestly, as if these townspeople didn't have enough trouble with the murderous priest controlling all of their minds! They're well-built screens - no size or gravity cheating. The only problems I found were a couple of extremely unclear item names - if the word 'luck' appears on a list of items to find, how can that possibly be interpreted? Yes, the answer - a four-leaf clover - makes sense, but it's certainly not the first thing that comes to mind, and it, along with a few others like it, feel very out-of-place in an otherwise strictly literal game.

It's all 12:1 screens here. This is a traditional HOG - there are environmental problems to solve, and the player will do it by picking up a bunch of things and using just one of them. It's meat-and-potatoes gameplay, and the game handles it well, but there are no boundaries being pushed here, not are there any steps taken to make the HOSs feel like an organic part of the world.

The game's puzzles all fit the world extremely well. There's boat repair, map construction, a few ornate locks - it all works in the 'small town mystery' milieu. Enigmatis' greatest strength is the mood that the developers have created. The locations are beautifully-drawn, full of storm-battered houses and crumbling old buildings. They're attractive enough to look at that I almost didn't mind the game's biggest flaw - the lack of a fast-travel system. There is a truly epic amount of back-tracking to be done in this game, and it's almost inexcusable that the developers didn't understand that players want to be able to click on a map and just be moved to that location. Especially since there's no good reason to keep that ability from them - it's not like the game is constantly surprising players with ambushes on their way to the next objective, or anything like that.

Enigmatis' story really is its strongest point. Using a wonderfully-conceived 'evidence board' system in which the player gradually rebuilds the case that the detective had been working on, a tale of supernatural menace is gradually revealed. For a character who gets almost zero screentime, the Preacher is expertly built up as a credible threat, which makes the final confrontation with him all the more thrilling. While its presentation may be lacking in places, Enigmatis confidently tells an enthralling story, full of intriguing twists and genuinely surprising reveals, kicking off a franchise with matchless aplomb.

Curious about the playthrough which led to this review? The first part is below!

Posted by The Hidden Object Guru at 00:28