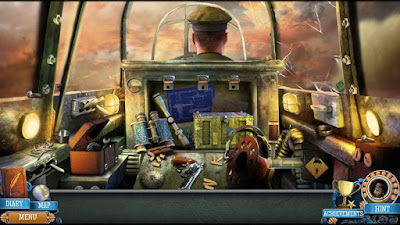 Wartime isn't a particularly popular setting for Hidden Object Games - they are, by their very nature, not particularly combat-intensive - so I was excited to see how the developers at Brave Giant were going to handle the combination. They've made the safest possible choice, deciding to look towards the first name in uncovering mysterious secrets during WWII: Indiana Jones. There are certainly worse places to go looking for inspiration. The game puts players in control of Agent Walker, who is dispatched to retrieve the Spear of Destiny - a relic of unimaginable power - and keep it out of the hands of the Nazis, who would no doubt use it to conquer the entire globe! 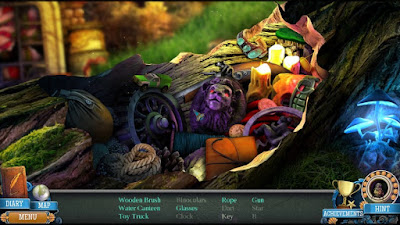 It's not fantastic. The screens tend to be loaded down with huge amounts of random nonsense that don't make a lot of sense for the location in which they're found. About half of the items on any given screen can be trusted to make sense in the ancient temple or French dock they're discovered inside, but the rest will be a tangle of playing cards, origami and children's toys. The items themselves are universally well-drawn, and the art style is consistent, but logic is lost more often than it should be. Especially in the most ludicrously out-of-place hidden object screen I've ever come across (pictured above). Agent Walker smashes open a fallen tree only to discover that it's been stuffed full of rope, coins, a live grenade, and lit candles. That's just madness.

It's a pretty even split here - while many of the HOSs are traditional 12:1 screens, there are also quite a few integrated screens. These are either well-built mini-puzzle screens, or the much rarer 'clean-up' screens, where the player is given a list of items to find, but within the narrative of the game they're removing them to uncover the puzzle pieces or lock mechanism parts hidden behind. If a game is going to use 12:1 screens, this is one of the best ways to fit them into the story.

Despite a few lacklustre HOSs, Agent Walker manages to deliver a compelling story. The puzzles generally fit the theme quite well, with the resourceful Agent Walker called on to repair shoddy technology, escape from deathtraps, and dodge deadly pursuers. Also, she kills a lot of people. A surprisingly large number, in fact. As a war-themed game, I know this shouldn't come as such a surprise, but I was legitimately surprised at the sheer volume of Nazis that Walker does in, whether by springing deadly traps or simple wielding the eldritch artifact she'd been sent to track down.

Sadly, Walker herself remains the game's weak link. The developers have made the odd choice to go with a silent protagonist, which robs the player of the chance to get to know and like the person they're controlling. Instead of Walker explaining her thought processes and making exciting revelations, whenever the plot needs to move forward the game pauses for stilted narration which lays out what's going on. It's a baffling decision on their part.

While I may have some misgivings about the developers treatment of their main character and facility with hidden object screens, Agent Walker is still a winner. With its unique setting for the genre, breakneck pace, and wonderful art design, it was a joy to spend three hours with. Sure, it may be derivative, but Indiana Jones would fit perfectly in the world of hidden object games, and if Spielberg isn't going to give us an official game, I'm glad developers like Brave Giant have stepped in to make it a reality. I look forward to Agent Walker's next adventure - assuming all of this game's clunky aspects don't make it into the sequel.

Want to see the playthrough that led to this review? Check out the video below!

Posted by The Hidden Object Guru at 01:00