Chronicles of The Witches and Warlocks 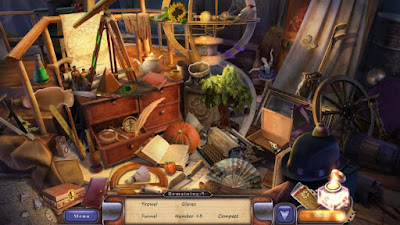 Yeah, that's an awkward title, to be sure, but let's not dwell on it. Especially when the game turns out to be suspiciously light on the two titular figures. Here's the premise - an adventurer has been accused of murdering a mountaineer with an ice axe! This happened in a residential hotel, and no body was found, so I'm not sure how they made the charge stick, but let's move on - the player is controlling the adventurer's girlfriend, a prominent lawyer, who'll use every legal trick she knows to clear her man! I'm kidding, of course, what she'll actually do is use magical portals in a hotel room to jump do various eras, solving puzzles and finding hidden objects! It's never entirely clear how any of this is meant to help clear the adventurer's name, but is that really the most important thing? Of course not - so let's move on to the hidden object criteria! 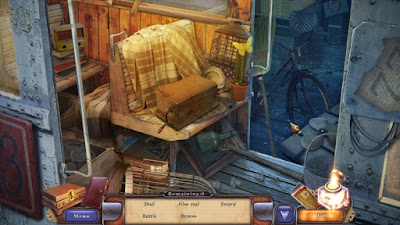 More than a little. Every screen is made up of a flood of nonsense dumped in the corner of some room or another - various types of cheating abound. Items are randomly stuck all over screens in entirely illogical places. In addition to the standard nonsense like knives and pens run along edges of desks, the game occasionally pulled some completely nonsensical moves like hiding a vinyl record in the underside of a lamp. What's worse, occasionally the game becomes downright impossible, as a few items are listed by the wrong name. I spent a full minute looking for a 'funnel' before giving up and hitting the hint button, which revealed that the game was asking me to click on an oilcan, of all things. Perhaps the worse example was the game requesting an 'Ostrich Feather' when it really meant 'peacock feather'. How does one even make a mistake like that? Also, couldn't they have just written 'feather'?

It's strictly 15:1 screens here - with the small caveat that the player is only ever presented with six named items at a time - the rest sub in as old items are discovered. This certainly has the effect of making the screens a little more engaging, but their poor construction keeps them from ever really being a pleasure to play. The screens themselves are attractively drawn, but too often unclear or generic names are used, making items surprisingly difficult to find. In on case, the game wanted me to click on the 'workshop key', yet gave me no indication that the key in question was a flat disc which fit into an ornate door lock.

Again, this is mostly a mixed bag. Many of the puzzles work within the game world - ornate unlocks, misplaced books, and brewing stations all fit nicely into the game's world. Too often, though, the game messes up the fundamentals of gameplay. Here's a fairly big problem - when there's an item or area that must be activated in order to move the game forward, the cursor changes to a gear, but clicking on it doesn't bring up a bit of text hinting at what the problem that needs to be solved is. So I'll look at an open manhole cover, and the small item floating down in the sewer, but since clicking accomplishes nothing, I'll have no idea what I should be looking for to solve the puzzle. A net? A hook? All that's left to do is visit every screen and click on every item, or just rely on the Hint button - neither is a good option. There are also a number of questionably-built puzzles, with instructions that don't make sense, or controls that aren't precise enough. I didn't skip any of them, but I came awfully close, and would have felt entirely justified in doing so.

Chronicles is such a beautiful game that I want it to be better than it is - the graphics and locations are gorgeously built, but the gameplay which takes place in them just isn't up to snuff. I should love a game that uses Silent Hill 4: The Room as inspiration, but there's just too many rough points to recommend this title. By the end it gets so shoddy that the developers play two hidden object scenes in the wrong order, transforming them into 15:0 screens, and somehow no one noticed. Hopefully this is just one bad effort from developer 8floor, whose 'Portal of Evil' I enjoyed quite a bit.

Although, come to think of it, that had one incredibly buggy puzzle as well...

Want to see the playthrough which led to this review? It starts in the video below!

Posted by The Hidden Object Guru at 01:13