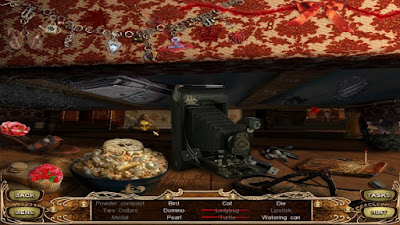 Within this single trilogy the evolution of hidden object games can be seen. The first offered screens full of clutter, punctuated by completely random puzzles which had nothing to do with the story. The second game still featured questionable HOSs, but clearly the developers were beginning to understand that 'story' wasn't just the pages of text that appeared between levels, but rather the most important element in tying the game's elements together into a coherent whole. They didn't do a great job of it, of course, but at least they understood that HOGs were capable of being something more than a casual timewaster. Now, with the third game in the series, how close have the developers come to the greatness that this series would eventually produce? 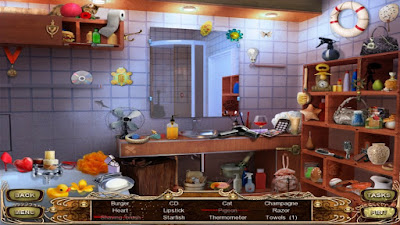 It's still pretty much a mess, but a considerably more attractive one than it used to be. The items are now drawn to look like they fit in a given screen's lighting and setting, rather than just being clip art which was dropped in any old place. Beyond that, however, things are still very rough. There's plenty of size and gravity cheating, but at least the items aren't wildly anachronistic and random any more. That's not to say there aren't flowers stuck in shoes for no logical reason, and a few silhouettes so faint as to be nearly impossible to find, but by and large, this game is a huge step in the direction of better HOS design.

Just 12:1 screens here. There are plenty of object-based puzzles for the player to solve on their way through this latest haunted hotel, which means plenty of HOSs in which to track those items down. While it would be nice if the developers had put a little more work into justifying the object hunting, just demonstrating the understanding that HOSs can be something other than filler shows how quickly this genre was growing from casual fluff into something more meaty and worthwhile.

The series is certainly getting there with this entry. The game tells a single, largely coherent story about a fake Mulder who teams up with an old-timey detective in a plan to shut down a time-traveling hotel powered by the ennuis of failed artists. It's more complicated than that, of course, and the game's greatest accomplishment is how straight it plays the storylines it inherited from the first game in the series. Sure, the hotel and its killer fog never really made much sense, but the developers barrel ahead anyway, assuming that by throwing in a few sinister characters and giving fans of the series a chance to revisit classic rooms from earlier in the series they would get away with their largely nonsensical story. The fact is, they come pretty close to getting away with it.

Haunted Hotel 3: Lonely Dream isn't a great game by any stretch, but it is an instructive one. Anyone interested in the development of the genre should give these three games a look - they'll see a new form of entertainment gradually finding its feet, and figuring out the ideal form of what it can be. Lonely Dream never reaches the heights that later games in this series would, but as a graphic adventure it's fundamentally solid, even if the story doesn't hold together as well as it could. The game's extras menu promises a second trilogy of games coming soon - and while I can find no solid evidence that those ever came to pass, I will continue working my way through this series, hoping to see what other insight it can provide into the ongoing evolution of hidden object games.

Curious to see how the adventure winds up? Check out the video below!

Posted by The Hidden Object Guru at 01:20