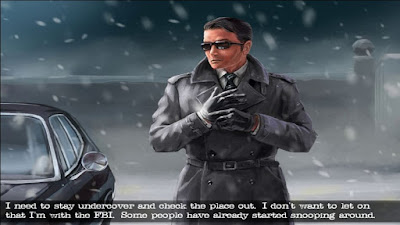 No one can say that this isn't a huge improvement over the first Haunted Hotel. Likewise, it would be difficult to give it any compliments beyond 'it cleared an extremely low bar'. If I'm being honest, that bar was buried ten feet underground, so as long as HH2 could manage a crawl - mission accomplished. The game starts a year after the first adventure. The man who escaped the first game with a magical cat in tow apparently mailed the Detective's diary to the FBI, and now an agent has arrived at a related hotel to continue the investigation. Will he finally bring the conspirators to justice? Well, considering that this game is attempting to ape the X-Files in every way possible, I'm going to predict no. 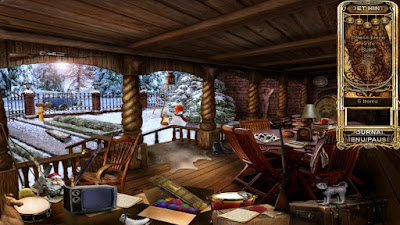 It's terrible. Exactly as bad as the previous game in the series. The only difference between this game and the last one is that the player isn't asked to go back to the same room over and over again, finding the same items. No, HH2's innovation is to have the player constantly move to new rooms, where they can find the same items over and over again. And by 'same items', I mean literally the exact same items that were used in the first Haunted Hotel. I recognized huge swaths of the previous game's library of images stacked randomly around this new hotel's common areas and private rooms. Thank god the backdrops are all new and never repeat within the game - otherwise this would hold the record for the least amount of new content put into a HOG ever.

It's generally 30:1 screens here. No, that wasn't a typo - players will commonly be asked to find 30 items on each HOS. On one level this is refreshing - there isn't much content in the game other than the searches, so at least there's a lot of searching to do. On another level, it's deeply frustrating, because the game's developers weren't up to building a library of objects more than about 120 items big, so players will find themselves searching for the same items over and over again. I would guess that I was asked to find a cork in most of the game's levels, and in one particularly egregious example, I was asked to find a set of binoculars four screens in a row.

The game doesn't have many puzzle screens, but the developers actually do a decent job of tying everything together. At the end of each HOS the player will have an item that either unlocks the next room or helps them find the next minigame to make the transition. This actually leads to a nice visual effect - a couple of the minigames are jigsaw puzzles that the player has to assemple, and when they've been completed, the player will suddenly notices that they've been building a picture of the next location they're headed towards. The moment the puzzle is finished the image fades from black and white to colour, and the player can immediately start finding objects there. Yes, it's not a brilliant innovation by any means, but in a game as frustratingly repetitive as Haunted Hotel 2, I was happy to find spots of inspiration wherever I could.

Haunted Hotel 2 certainly is less terrible than its predecessor, but that doesn't mean it's worth playing. Only completionists desperate to see every entry in the series should bother. Of course, since I'm one of those, we can all expect to see a review of the third game turn up here in short order. Hopefully the series will continue improve, and the third time will be the charm!

By which I mean, be the first game to actually be worth playing.
Posted by The Hidden Object Guru at 01:02