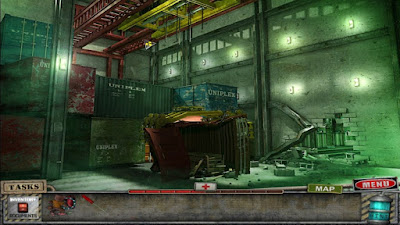 After a car crash caused by a stubborn unwillingness to just run over a zombie, the game's main character is thrown into a coma, from which she awakes in plenty of time to discover that the town she was unlucky enough to convalesce in has been wholly run over by zombies! Only by finding some hidden objects, solving some contrived lock puzzles, and, oddly, maintaining her health bar, will she be able to rescue her family and escape the terrors of Livingston! 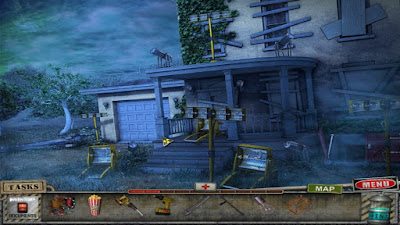 They absolutely do, but the game does a great job of earning it. With the town of Livingston having been entirely destroyed by zombies and associated civil unrest, it makes sense that everything would be a godawful mess. Beyond that, it makes sure that, for the most part, at least, the items players are asked to search for are closely related to the places in which they're hidden. A pantry will mostly have foodstuffs, a police station desk will be covered in tools of the trade - these are well-drawn screens obviously produced by people who cared about making sure that they were internally consistent.

It's purely 16-1 screens here. Clean up an area to find the one item the character needs to progress. The game actually cares enough to - usually, anyhow - make sure the item the player is specifically looking for is something that would actually be in the location they're searching. Like the police desk mentioned above - the player needs to find a club to break some glass - where else would they look, logically?

The game is broken up into four distinct story segments, with few, if any, items making the journey between them. This gives the game something of an episodic feeling which helps to build a sense of momentum. The player goes from recovering from her accident to starting a search, to entering the heart of darkness, to planning a desperate escape. The hidden object puzzles fit unusually well in the game world, and the puzzles generally take the form of slightly-preposterous locks and rewiring minigames. As a result, Small Town Terrors: Livingston offers an unusually consistent game experience, with little to distract the player from the story it's telling. Even the extra health bar mechanic works well - the main character is recovering from her coma, so she's a little on the weak side, so whenever she needs to perform a  physically strenuous task, like barging through a barricaded door or opening a rusty gate, she'll first have to find some first-aid supplies to patch herself up. In practice this just creates a little more busywork as the player is asked to track down health kits as well as all the game's quest items, but that extra bit of content does a great job of making the game world feel that much more fully fleshed-out.

While Small Town Terrors: Livingston may not be up to modern graphics standards, there's a lot of great content here. Along with a truly obscene number of jump-scares for a hidden object game. The only thing keeping it from being discussed alongside other minor genre classics is the lack of a functional map. The game's four areas are each fairly dense with locations, and while a map is available, it neither shows points of interest not allows fast travel, making it wholly useless. This causes a mildly frustrating amount of backtracking, which is one of the few blemishes on an otherwise great experience.

If you'd like to see the playthrough that led to this review - check out this playlist!

Posted by The Hidden Object Guru at 22:58