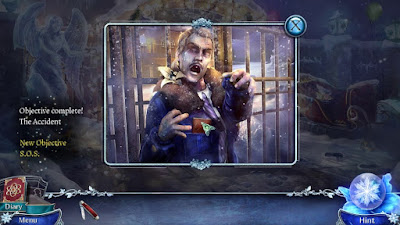 An old hotel battered by a winter storm, guests and proprietors trapped together by circumstance, and a vicious killer hell-bent on exacting revenge for the death of a young woman some years earlier - did I accidentally start playing The Axiom Butcher again? Crimson Lily hits a surprisingly large number of similar beats as that game, and is only slightly less effective as a result. For one thing, Crime Secrets' plot is much more coherent - by the end of the game I was completely aware of everyone's relation to one another, and why the murder spree had occurred. I know that's a very low bar to hold a mystery to, but that should only go to show just how muddled The Axiom Butcher's story got towards the end. 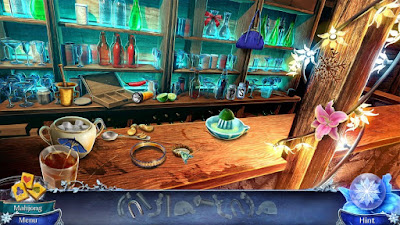 Absolute mixed bag here. To start with, there aren't very many hidden object screens at all, which is always a disappointment. The setting offers plenty of logical areas for the HOSs to take place in - closets, sheds, a vault - but the screens tend to be a little on the sloppy side. There's plenty of size and gravity cheating, and in the item construction scenes - of which there are a few - absolutely no care was put into integrating the item pieces into the background, making them all stand out, rendering the screens almost impossibly easy.

The HOSs are strictly 12:1 or construction-based, so there's a 50/50 chance that the player will have a logical reason for all their object hunting. The puzzles are comparatively well-integrated into the narrative, however. Sure, there are a few contrived locks with overcomplicated keys, but the game does a very good job of coming up with puzzles that feel like an actual part of an investigation. Whether it's '9 Clues'-style crime scene investigation, using logic to figure out which lock a broken key fits into, or a standout puzzle where the player, in need of a map, has to build a model of the environs and then photograph it, the game does a great job of keeping its puzzles a part of the narrative.

Crime Secrets: Crimson Lily is unusually focused and direct for a hidden object game. While the player is offered a map for quick-travel purposes, there's almost never an occasion to use it. The game doesn't take place over a huge number of locations, but more importantly, the narrative keeps the player barrelling forward, rather than dawdling around looking for a series of oddly-disguised keys. The player moves to a location, finds all the clues and solves all the puzzles there, and then heads to the next location, never to return. I can count on one hand  the number of times I was asked to head back to an earlier location to grab an item or complete a puzzle, and it was never more than a screen or two of travel. The game is so tightly constructed and good at motivating the player forward that even if some of the puzzles and searches are a little contrived the whole thing moves so fast that it's difficult to notice any flaws.

As a mystery, Crime Secrets isn't exactly going to challenge its audience - an opening sequence establishes the mystery killer's motive as getting revenge for a murdered woman, and then players meet a character literally named 'Grief'. Still, even with its paltry number of HOSs, there's enough here to justify the attention of any fan of the genre. With its attractive art, decent story, and great puzzles, Crimson Lily is more than worth the price.

Posted by The Hidden Object Guru at 14:20