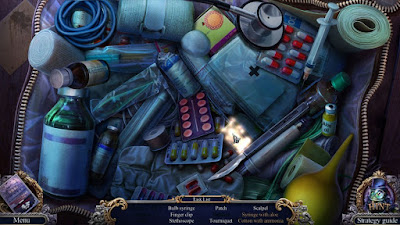 This is just lush professionalism at its best. Apparently (so the game tells me, anyhow) this is the latest title in long series of HOGs about a mystery-solving organization that battles everything from common thieves to frost giants. I'm not surprised, because this game is clearly the product of people who know exactly what they're doing. Gorgeous graphics, interesting puzzles, and engaging story. Hidden Object Games don't get a lot better than this. That doesn't mean the title isn't exempted from the hidden object game judging criteria, though! 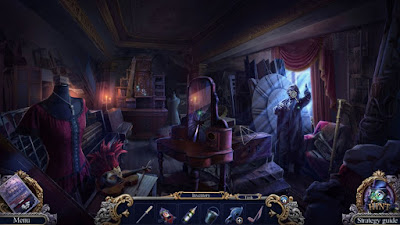 Barely at all. The game is set in a theatre during an attack by a mysterious supernatural force. So take an areal already prone to massive clutter and add a reality-quaking event on top of it - the result is the perfect justification for messes that need to be shuffled through. The game also does a great job of stick only items that realistically belong in the locations on the screens. One notable screen asks the player to look at a packed orchestra pit and pick out ten particular instruments based on their silhouettes - totally arbitrary, of course, but still refreshing and well-designed.

It's mostly 12:1 fare here. For all its successes, Paxton Creek Avenger never does a stellar job of giving the player a reason to paw their way through the screens packed with random items. Whether it's standard screens or a strange match game hybrid, where the player is asked to look at a cluttered screen and find pairs of things, there's never really any reason to do so other than to pick out the single item that will be useful a little later on. These extra types of HOSs mix things up and keep them fresh, but they don't make up for a lack of effort being put into merging them with the story and gameplay.

The theatre (and its surrounding environs - no spoilers, though) is a fantastic location, and the developers have done a great job of packing it with puzzles which fit thematically and help build the game's world. Disarming bombs, repairing machines, defeating security systems - all have been believably transformed into puzzles. In an especially nice nod to the casual gamer, not only are all of these puzzles skippable with the filling up of a hint meter, but each one comes with both a 'hard' and 'easy' version that can be switched between with a simple click of the mouse. I hadn't encountered this mechanic before, and I was happy to have a little help with the sliding block puzzle that the game threw at me towards the end. Normally I just brute force my way through those things, but this proved a welcome reprieve.

Mystery Trackers: The Paxton Creek Avenger is as good as a HOG can get without actually lifting up the hidden object screens to a fully integrated level. It so impressed me that it made me want to check out other games in the series - which the developers were happy to help with! The game features one of the best bonus features I've ever encountered in a HOG - delving into the extras menu will reveal 'casefiles' of the other games in the series. The player can simply click on one of them and get the chance to play a puzzle and HOS selected from that game. It's great to see developers with enough confidence in their work to put little slices of them out there as samples, and from what I've seen, this whole series is worth a closer look.

Posted by The Hidden Object Guru at 00:53