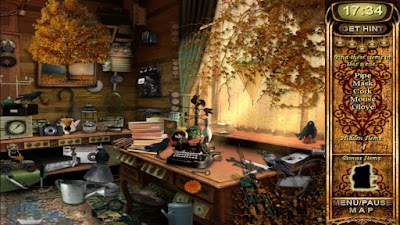 With this game, I delve back into the history of HOGs, to a time when players were expected to just be happy that they were faced with a screen full of random garbage and a list of specific things to click on. A time before narrative coherence, integrated puzzles, or any conception of fairness in HOS design. I've been here before, when covering Civil War Mysteries, and while Haunted Hotel is nowhere near that dire, it's a little shocking to see a genre which would one day lead to such high points as The AXIom Butcher start out in such a rough state. 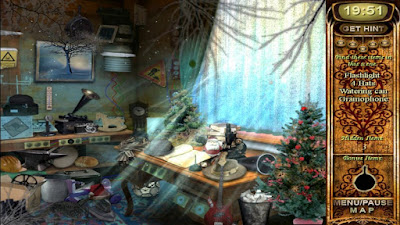 This may as well be the definition I use for 'worst possible example' of this problem. Every screen is cluttered with nonsense arrange with little to no care or logic. Items are presented with no thought given to their logical size or gravity's effect on them. Colours are changed for no logical reason - even transparency cheating is used, and that's essentially the lowest rung to which a developer can sink. Additionally, the game is wildly inconsistent about what items are called - I'd seen 'lighter' appear on the list of items a number of times, and had found both zippos and little plastic disposable items to check them off the list. Then, towards the end of the game, I spent three minutes searching for a lighter on a set of stairs, only to finally give up and hit the hint button - what had the game wanted me to click on that whole time? A flashlight.

Not in the least. As the player moves to each new floor of the titular Haunted Hotel, they're presented with anywhere from 1-6 rooms where they need to find items. Their reason for doing so is never hinted at or suggested even obliquely, and while the story segments do mention a few of the rooms they visit, collecting random junk doesn't feature in the narrative. At first the game seems to be going a little easy on the player - they'll have two rooms with 8 items to find in each, but the game will only actually require them to find 14 to move on to the next floor. This ceases feeling like a favour or help in the second half of the game, by which point the player is being asked to turn up 40-something items from five different rooms, and still they only have a one or two item margin for error.

There is no whole. There are text-based story segments which have nothing to do with the gameplay. No matter how disconnected the HOSs may seem, the puzzles are considerably worse. After finding all the items on a level, the player is forced to 'power up' the elevator to the next floor. This is accomplished by completing puzzles wholly unrelated to anything else in the game. There's something called 'Energy', which is just clicking on sparks as they fly by - the rest are generic rejects from other titles - untangling cat's cradles, playing bejewelled, Simon Says... it's all random and somewhat annoying.

It's too bad the main game is such a mess since the story - which, as mentioned above, is told wholly through interstitial blocks of text (in a weirdly meta touch, the main character spends much of the adventure reading the diary entries of a detective who previously explored the hotel) which suggest an interesting adventure the game is incapable of showing. Time travel, weather machines, possibly magical totem cats - there's a lot of fun stuff in the story, but by no means is any of it entertaining enough to warrant the frustrating grind that is the game that surrounds it. It just goes to show how terrible most HOGs were at the birth of the genre that this was considered to be good enough to warrant a sequel, let alone a long-running franchise. Still, despite how much I disliked the game, I will be checking out the next one in the series, as it will be interesting to see how developers got from this low point here to something amazing like AXIom Butcher.
Posted by The Hidden Object Guru at 00:59