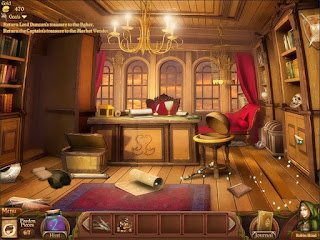 So, how does the most-adapted character in history/fiction work in the world of Hidden Object Games? Not too shabbily, as it turns out. Robin's Quest is a hybrid adventure/HOG, as it puts more focus on puzzle solving and world manipulation than simple object hunting gameplay. That, and it introduces a system where the player gains new powers not by training or learning spells, but by assembling Robin's famous band of Merry Men. Now, on to the Hidden Object Criteria! 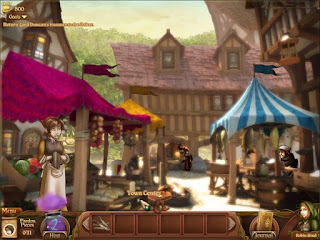 Too a modest degree. While there isn't much size or colour cheating, random objects will often be scattered all over the screen to make them a little more difficult to find, with no thought given to gravity or logic. At least there's no anachronism on display, so thank heavens for small favours. It's cleat that the game's HOSs weren't the highest priority - while they're well drawn, there aren't enough of them, and clearly more care was put into the puzzles and minigames.

Standard 15:1 screens are the order of the day, with one unfortunate twist. While most games in that subgenre will just hand the player a long list of items let them get to it, Robin's Quest makes the odd choice to only show the player a few of the items at a time. This isn't completely unheard of, but normally a new item will swap into the list once an old one has been found. Robin's Quest goes another way with its lists, offering five stacks of words, each one three items deep. Find an item, and the next item in the stack appears. Find all the items in the stack, and it's gone, but the others remain. This can lead to a situation where the player has found twelve items, and has three left, but doesn't know what the last two are, because they're stumped by the top of the pile. It's not a great system, as I didn't enjoy the arbitrary and pointless increase in HOS difficulty.

Darn well. While the HOSs come up short, the minigames and puzzles are all well-made and thematically perfect. Many involve archery, as one would expect, and all the merry men are always quick to jump in, moving heavy objects, sweet-talking guards, or pickpocketing, depending on what the situation requires. The story, which finds Robin attempting to battle corrupt taxmen while rescuing her imprisoned husband, is a fun take on the legend, and the steps that the story takes to get there - each area is built around Robin helping a different townsperson recover their gold - serves to make the world feel bigger and more real than is often the case.

The vast majority of the HOGs I cover here are gothic or horror-themed, so it's nice to see one that's all bright colours and smiling characters. Robin's Quest is a beautiful casual adventure. Sure, anyone looking for a large number of challenging HOSs should go elsewhere, but those interested in a couple of hours of solid puzzling can do a whole lot worse.

Care to watch the playthough that led to this review? Check out the first video here!

Posted by The Hidden Object Guru at 00:20