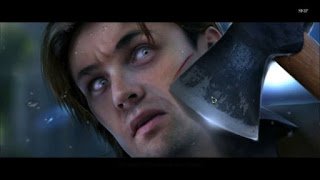 A haunted hotel with a murderous backstory? Could there be a better setting for a Hidden Object Game? Apparently the publishers at Big Fish don't think so, as they've put out eleven games in this particular franchise. The Axiom Butcher is the latest, and it concerns the aftermath of a slasher rampage that occurred at the titular hotel some years earlier. When the player, controlling a prominent detective, chances upon a stranded police officer during a blizzard, they discover that the murders may be starting up again - and it's up to them to put a stop to it before another hotel full of people are massacred! 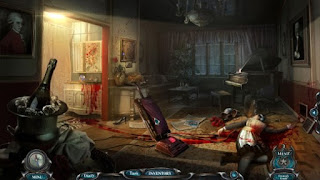 Quite a bit, but the game does a great job of justifying it. Set in a recently-renovated hotel, The Axiom Butcher makes it clear that there are still plenty of dilapidated and trash-strewn corners of the building, and these provide the setting for most of the game's hidden object screens. So the player will find numerous piles of garbage that need to be sifted through, but all of the items within manage to seem plausible within the locations they appear. There's almost no instances of size, colour, or gravity cheating - this leads to HOSs that are fundamentally fair to play, even tending a little towards the 'easy' end of the difficulty spectrum.

A pretty huge mixed bag here, as there are absolutely no integrated hidden object screens. Whether the game is offering 12:1 lists or providing outlines of the items players need to find, there's never any reason given for most of the searching they're asked to do. Worse still, there are a number of 'object match' screens, where the player has to find six matched pairs of symbols hidden around the screen. Memory is a perfectly good type of minigame, but seeing it mixed with hidden object screens does not lead to interesting or worthwhile results.

The Axiom Butcher feels a little stretched out at times - at four hours (including bonus chapter), it was one of the longest HOGs I've played. This extra length isn't because it's absolutely packed with puzzles, HOSs, or story, but rather a truly astonishing amount of busywork the player is tasked with. Nearly every door/cabinet/trunk in the hotel is secured with an impractically ornate lock which can only be opened by finding the correct symbol/key/rune. There are few locked panels that don't have another locked panel hidden behind them. There are large swaths of the game where I found myself unlocking an elaborate cubbyhole to find the key to open another door at the other end of the hotel, which hides inside it the key to the sub-cubbyhole inside the first location.

It's too bad the game felt the need to put in so much filler, since there's a lot of interesting story to tell, as well as a number of surprisingly well-designed puzzles. If anything, I would have liked to hear a little more of the story, since the details get a little convoluted and muddy towards the end. The Bonus Chapter doesn't offer any closure on the main story, but it does give players a look at the hotel's terrifying origins, while providing a solid standalone 1-hour adventure.

Haunted Hotel: The Axiom Butcher doesn't have enough plot and puzzles to balance out the sheer amount of backtracking and number of fetch quests the player is asked to do. Still, the plot is interesting and the puzzles are almost universally well-crafted and challenging. An fan of the hidden object genre who doesn't mind a little extra padding will certainly find this to be a worthwhile entry.

You can find the first part of my playthrough here-

Posted by The Hidden Object Guru at 23:54