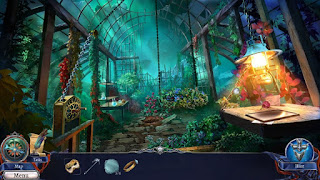 With three games in a row managing to blow me away with their thrilling stories and stellar production values, the Grim Legends series is quickly making it to the top of the heap when it comes to solid HOG franchises. This one moves away from the more classical European mythology that influenced the first two, and sets its sights on rather more recent targets, specifically the games 'Assassin's Creed' and 'The Order'. Yes, like Abyss: Wraiths of Eden, this is another prime example of one of Artifex Mundi's developers lifting art design and aesthetic from a popular game and then building their own world out of the borrowed assets. Like Abyss, this results in an unmitigated success. 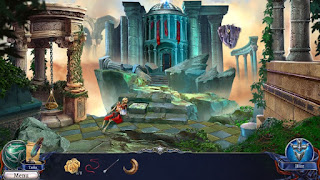 Not at all. The game is set almost entirely in a town besieged by mystical forces, and the developers cannily use this justification to explain why the HOSs are littered with random objects. Everything makes sense in its location and time period, with almost no cheating to be found. These are some of the best-rendered HOSs I've come across.

Absolutely. The game doesn't have a lot of Hidden Object Screens, but the vast majority of them ask the player to only find specific items that they're actually going to need in their adventure. Whether they're looking for a dozen plants to complete a recipe or assembling a crossbow, nearly every item the player is asked to click on is story-related. There are a couple of 12:1 screens, but they're just a tiny minority of the game's HOSs.

This is a fantastic production all around. The various puzzles all fit within the world, even the minigames are right on point. In addition to standard point-and-click adventure gaming, the player will occasionally have to battle an occult force - this is accomplished by playing a rune identification minigame that proves quite thrilling in each of its instances. The game also makes sure to include vast segments of backstory within the puzzles themselves, leaving the player to learn backstory and receive exposition through gameplay rather than dialogue or text documents. This has been a feature of the series all along, but here, in part three, the developers have really raised it to an art form.

The game's only drawbacks are so small that I almost hesitate to mention them. There's a fun sequence right at the start that asks the player to come up with a plan for defeating a monster using the environment it's standing in - it's a great exercise, but unfortunately it's just a one-off. There's also one minor problem with the bonus game - it's intended to provide closure for the main game's story, as bonus levels so often do, but it ends with questions still lingering. Not a great way to leave your players, developers.

With a great story, beautiful world, and challenging puzzles, Grim Legends 3 is as good as HOGs get. The beta for this game was my first experience with this franchise - and it inspired me to check out all of the other entries. Each one has been better than the last, and The Dark City, while a departure from the series' previous style, really is the best entry yet. I just hope the next game in the series can live up to the bar that's been set.ormula, with pale women endangered by terrible family secrets, gives the whole game a sheen of class and depth that set it apart from the crowd.

Curious about the playthrough that led to this review? Check out a video of it below! Or, you know, you can go to YouTube where it's big.

Posted by The Hidden Object Guru at 17:56