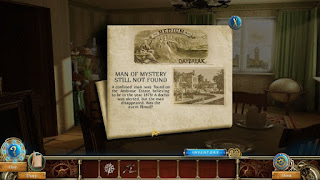 As the second game covered in my 'Hidden Object Drinking Game' series, my memories of this one are a little muddy, so please bear with me on some of the finer points. The game concerns a woman (a reporter, maybe?) whose father or grandfather (definitely one of those) has an unfortunate run-in with a time traveler! It's up to the player to visit various periods in history to rebuild the family time machine, save the relative, and unlock the mystery of stonehenge! So long as the game stops spinning, that is. 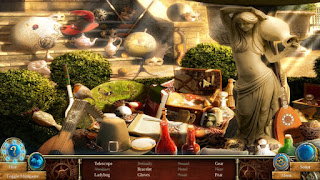 It's pretty bad. While the developers are good at filling the screens with items only from their specific time periods, the actual items are scattered around with no thought given to logic or gravity. There are so many cheap and borderline-unfair item placements that this game would have given me trouble even if I wasn't drinking heavily while playing it. Seriously, I'm sick of seeing the word 'bow' and then being expected to know whether I'm looking for 'violin bow', 'bow and arrow', or 'gift wrapping bow'. That's just infuriating. I will give the game credit on one front - there are plenty of HOSs to play. While each era may only be two screens wide, at least each one has a good amount to do in it.

12:1 gameplay through and through. Player need one item, and are asked to find a passel. For no good reason. This is clearly a game made by people following a template for HOG construction, littering a HOS here and there, asking players to solve a couple of simple puzzles in each area and then quickly moving them on to the next. No real effort is made to have any of this feel particularly plausible or natural.

It certainly functions as it's supposed to, setting up conflicts and then resolving with a HOS and a puzzle. While being bland isn't a crime, nothing about the game's situations, characters, or even puzzles really stood out. There's a bit of time travel humour right at the start, in which the main character finds herself in medieval times and is surrounded by people ready to comment on her bizarre style of dress, but even that only happens briefly - beyond the first chapter there aren't really any characters of note to add colour to utterly rote gameplay. Then the whole thing ends up with a sequel hook and no story resolution. It's a shame.


Has drinking made my memories of this game considerably less sharp than they ought to be, its shortcomings aren't merely a product of my imagination. The game simply isn't well-made or interesting enough to recommend. It's suitable only for those desperate to play a bunch of HOSs they've never seen before, and even then, make sure to get it on sale.

Want to see the playthrough that led to this review? Here's the first video in the playlist!

Posted by The Hidden Object Guru at 00:23