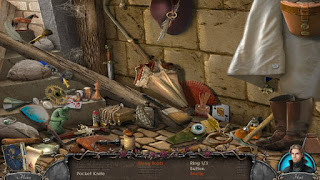 So take the title with a grain of salt. In the first place, I'm relatively certain that whatever happened in Kisilova, there were fewer sliding block puzzles involved than the game would suggest. Still, the game presents an intriguing premise - people are dying in a remote village, vampires are blamed, and it's the job of some Viennese bureaucrats to get to the bottom of the mystery. Unfortunately, the bottom is beneath a huge pile of mediocre hidden object screens.

It's terrible. Every surface in the game is piled with random nonsense for no discernible reason and with no apparent theme. Yes, the titular village is worried about a vampire, but that's no reason to start dumping assorted garbage and priceless antiques on every flat surface. At least the game is decent about keeping the items in question from being too anachronistic - it's set in the early 18th century, after all, so the occasional piece of plastic is incredibly out of place. Rodin's 'The Thinker' even makes a brief cameo, despite being sculpted two hundred years after the game takes place.

It's 12:1 screens this time around, with the player asked to sift through fairly generic locations - dungeons, graveyards, kitchens - for predictably bland items. I would be less hard on the game's HOSs if any attempt was made to link to the story at all. I would even be kinder to them if they were just a little better designed. The graphics are unattractive at best, and while there's not a huge clash in art styles between environment and the items, almost no care was put into the screen layouts. Size and gravity cheating abound, with too-large or too-small items placed randomly around the screen to little effect.

The story is a simple enough affair - there's a murderer running around, making life hell for the inhabitants of Kisilova, the player has to figure out who the vampire is and deal with them. This is accomplished through a decent number of HOSs and some fairly simple puzzles. While the HOSs may not be up to snuff, the puzzles fit the setting quite nicely, reinforcing the myth that old Europe was filled with lockmakers who had entirely too much time on their hands. Also, the villain, who only became a vampire months earlier, seems to have gone all in on their new identity, hiring someone to craft an unbelievably on-point vampire-themed door lock.

Vampire Legends is harmless enough - it's not especially long, and the plot has a decent resolution in the bonus chapter. There's just nothing special here, and even the core gameplay is presented without flair or creativity. The most interesting part about the game are the bonus features, which include photos of the present-day Kisilova, and interviews with Serbian government officials about the true events upon which the game's story is based. The 'based on a true story' thing may be a stretch, but it's fundamentally the best thing the game has going for it.

Check out my playthrough of the game at this YouTube playlist!

Vampire Legends can be purchased at this link!
Posted by The Hidden Object Guru at 01:09