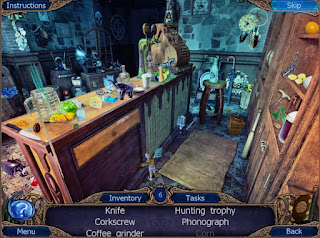 Of course there's a Golem. How could there not be a Golem, with a title like that? Taking on the role of a young woman who's just come into an inheritance upon a distant relative's death, player will find themselves scouring a few locations thoroughly as they search for clues to the mystery they're dropped in the midst of. This could get confusing fairly fast if it wasn't for the game's defining feature - the best map a HOG has ever offered. More on that later. For now, the adventures of a far-too-credulous young woman amid sinister circumstances! 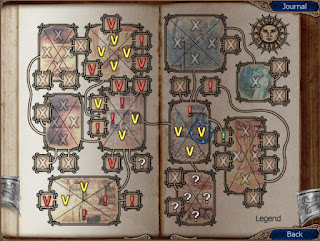 It's really bad. While a few locations may attempt to justify the extent to which they're cluttered with nonsense (a ransacked shop, an ancient tomb), it never works. The items have no theme or logic, and truly seem as if they've been dripped in at complete random with absolutely no care. Size and gravity cheating abounds, and half of the items look as if they were just nabbed from a clip-art library rather than drawn specifically from the game. There's no sense of an artistic theme between the items, and many seem to be actual digitized photos, which clash harshly with the drawn objects. It's truly a mess.

Standard 12:1 fare here, although if the player so desires, they can turn the difficulty down and only be asked to grab six items in order to unlock the key item. The game does offer one interesting twist in its HOS design, though - access to the player's inventory while searching. While the listed items in white can just be found normally, blue items require the player take an additional step, such as cutting open a piece of furniture, or lighting a candle. While some of these steps can be accomplished within the screen, some ask the player to go to their inventory and use an item which was picked up elsewhere. It's an interesting twist made slightly frustrating by the fact that there isn't a distinct colour assigned to those items, so it's impossible to tell just by looking whether a player should be searching the screen or their inventory for a solution. The game doesn't ask the player to use inventory items enough that it becomes second nature, so I often found myself tapping the hint button and discovering, much to my chagrin, I'd been looking in the wrong place..

Perhaps it's my love for the developers' other game 'Sinister City' that got my expectations high, but I was disappointed by much of Alchemy Mysteries. The story is perfunctory, with no real pace and a too-fast resolution. I won't spoil it here, but feel free to check out the video for an almost-hilarious villain death. The HOSs do it no favours, and none of the puzzles really grabbed me either.

Alchemy Mysteries: Prague Legends would be a complete wash if it weren't for two things - the best map I've ever seen, and an almost Mystian approach to room design. The first's brilliance is obvious the moment a player sees it - a detailed map of each of the game's areas and sublocations, each one with a symbol indicating whether there's something to do there, something to do in the future, or if it's complete. It makes navigation and keeping track of objectives simple, providing the comprehensive assistance that so many other games fail to. Also interesting are the locations themselves - instead of a wide variety of destinations, Prague Legends has just a few, but each is a virtual 3D space that the player can spin around within. Yes, they can only spin around 90 degrees at a time, for a total of four screens per location, but the warping transition effect, along with the detail in the rooms themselves goes a long way to making Alchemy Mysteries' setting feel more grounded than most other games. It's still not a success, but there's certainly enough interesting design elements to warrant a look for anyone interested in the genre.

Check out the first part of my playthrough here-

Posted by The Hidden Object Guru at 01:23