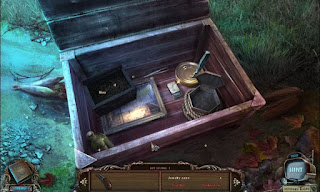 Beyond objects. The bane of my existence. That's what they're called here, anyhow - I'm referring to the little game that some developers play on their customers, putting in special items on each of their game's screens, little objects that transform subtly in the background. Find them all for a bonus! A feat I've failed to accomplish each time one of these screens has appeared in a game. House of a 1000 Doors? Grim Legends? Each one defeated me. Now Alien Town can be added to the list. Give me a list of nonsense and a pile of clutter and I'll blast through it in moments. A plaque that transforms into a piece of grating? I'll be here for hours.

But other than that, how was the play? 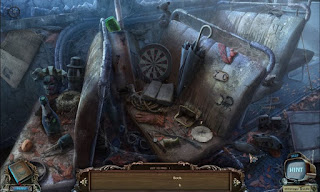 It's kind of a double-edged sword - the town in which the game is set is the perfect location for a Hidden Object Game. Crumbling architecture, mildewed furniture, general urban collapse - this is exactly the sort of place one would expect to find piles of nonsense to be sorted through. The problem comes with the game's story, in which mysterious things have only recently started to occur. Supposedly until just hours earlier, this was a fully operational town with a large population wandering around and living their lives. So why does everything look like it's ten years on from a complete industrial collapse?

A mixed bag, as is the usual. The screens are pretty much evenly split between 12:1 and Match screens, with the latter obviously being a huge disappointment. As always, I found myself asking why I was adding more garbage to these ridiculous piles. There's one glimpse of promise, when a mini-puzzle HOS shows up, but there's only one, so the game accomplished nothing more than to raise my hopes before crushing them. Perhaps the most disappointing misstep of all was when the game asked me to return to areas I'd already searched once, but as the second HOS started, I discovered that all the items I'd cleared the first time where back in their starting positions. That's a great way to make people feel like they're not accomplishing anything, developers.

It's not a bad tale, overall. The searches may be contrived, and the town may have a few more elaborate locks than are really believable, but the core narrative is serviceable. Playing as a Biohazard Investigation Agent, the player is dispatched to a small town to discover why all of the people have transformed into living statues. It would be an intriguing mystery if the solution weren't given away by the game's title. Even worse, the game ruins any possible chance for suspense by literally starting the game with a preview of the last scene. I'd offer a spoiler warning, but the game doesn't bother with one before showing the main character seting up a bomb inside an alien mothership orbiting the earth before blasting off in an escape pod. I was at first stunned by the audacity of such an opening - if a game starts with the destruction of an alien ship, where can it go from there? The answer, sadly, is to '24 hours earlier', so the players can wade their way through the much-less-interesting puzzling which led up to the exciting part.

I don't know what possessed the developers to so thoroughly spoil all of their game's surprises, as they took what could have been a decent story with middling puzzles and transformed it to the least suspenseful tale of alien invasion ever crafted.

Here's the first part of my playthrough!

Posted by The Hidden Object Guru at 01:25