Riddles of the Past 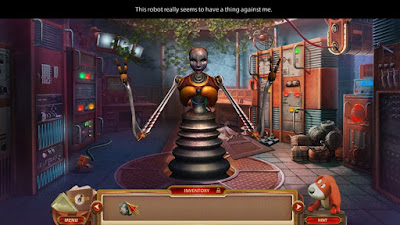 A woman with amnesia gets a clue to her past and heads to a mysterious town populated only by robots... and secrets! That's the intriguing premise behind Riddles of the Past, which is one of the cleanest and most focused HOGs I've ever encountered. There's a great location, some creepy robot designs, and a genuinely solid story that tracks all the way through. Before I get lost complimenting the game, though, we should get to the hidden object criteria! 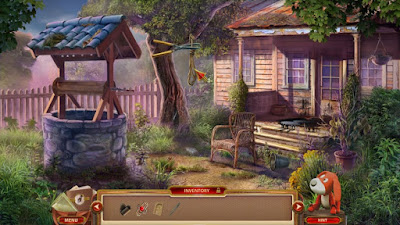 Not in the least. An innovate type of fully integrated HOG, Riddles of the Past has no distinct and separate hidden object screens. Instead of being taken to a zoomed-in version area of some location and being forced to sift through a pile of trash, all of the game's hidden object scenes take place within the game's natural environments. Every location is a plausibly distressed depiction of a town left to rot for a decade, and within each one the items that need to be found are fairly hidden. No size or transparency cheating here - the developers even go so far as to give the player a picture of each item they need to find. It will be sized differently on the screen, naturally, and probably turned to a different angle, but it works far better than silhouettes in giving players the leg up they'll need when they have the possibility of looking anywhere in the game's locations for the next item.

Entirely! In each of the game's screens there will be from 1-3 items which need to be repaired or rebuilt, using from 3-5 items. While the game might not have distinct HOSs, there's no shortage of searching to be done for fans of the genre. As with all true fully integrated hidden object games, the player will never be asked to pick up an item that doesn't directly relate to them solving a puzzle - and the game is all the better for it. This is as justified as hidden object searches get, folks.

Riddles of the Past's greatest strength is the way it uses the hidden object searches to move the story forward. Rather than pushing them off to the side and having the player track down an item or two here or there, the player is constantly presented with concrete problems that need to be solved, and asked to find the handful of items that will allow them to move forward. Compared to that completely logical HOG design, the puzzles can sometimes come across as a little arbitrary. Yes, this is a town run by a mad scientist, so some peculiar locks and machines aren't completely out of the realm of belief, but there's a weird focus on solving puzzles by doing simple math, which feels a little out of place.

It has great hidden object integration, good puzzles, and an above-average story. For anyone looking for a title that has the fundamentals of HOG design down pat, they won't do much better than Riddles of the Past. While it may not have the presentation bells and whistles of more recent games, it's a great experience from beginning to end, with enough gamplay variety and story turns to keep players hooked right to the end.

Curious about the playthrough which led to this review? Check it out below - with special guest DM!

Posted by The Hidden Object Guru at 01:11