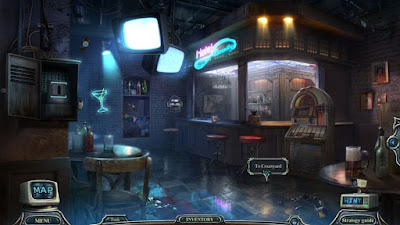 I'm now six games - halfway through, as of the release of Silent Waters - into the Haunted Hotel franchise, and I still don't have a sense of exactly what the franchise is yet. Obviously the first trilogy tells a relatively coherent story, while Charles Dexter Ward is just the brand name being slapped on a Lovecraft adaptation for marketing purposes. From the modern version of the series, with its high production values and tight design, I'd just played games 8 and 12 - and other than both of them concerning villains attempting to attain revenge for dead family members, I don't see any theme developing. I remain resolute, however - this is a consistently interesting franchise, if nothing else, and I'll do my best to find some connective tissue linking them, beyond the cleverest naming scheme I've ever encountered. 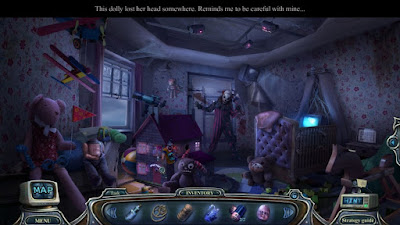 Barely at all. The game is set mostly in an abandoned hotel/medical research facility, so some dilapidation is to be expected. The main character is a detective charged with protecting a millionaire philanthropist who has a shady connection to an aborted cancer vaccine - the 'eternity project' of the title. The protection detail involves a good amount of scrounging through the wrecked hotel looking for tools to help navigate a madman's maze. Between the logical location and the idea that many of the messes are specifically created by the villain to provide a challenge, the visuals of the HOSs are well up to snuff.

It's a very mixed bag here. There are a couple of integrated screens, in which the player is takes with picking up a set of items from a list, and behind each one is a piece of a puzzle that needs to be completed. Other times the player is just grabbing items from a list  either as key words in a story being told, which sort of works because it's using the puzzle to further narrative, albeit in an obvious way, or they're just looking to match silhouettes to items onscreen, which I'm on the record as saying is my least favourite type of HOS. Actually, the game manages to innovate a little in that regard, reintroducing me to another terrible type of HOS: the memory game. In this, pairs of items are hidden somewhere on a trash-filled screen, and it's up to the player to pick the two hiding places in sequence. Why is this so horrible? Imagine playing memory, not with a set of cards laid face down on a table, but with a room full of items, a few of which have matching pictures drawn on the bottom. I've accepted the 'match pairs' puzzle design before, when all of the pairs were onscreen and just had to be discovered. This 'hide them behind arbitrary objects that can only be found through random clicking' nonsense is just bad design.

It's one hell of a story, I'll give it that. The puzzles, searches, and environmental interaction puzzles all make a lot of sense given the setting - a madman has built a labyrinth of doom, so a good amount of preposterously contrived danger is to be expected, even encouraged. In addition to the game's top-flight production values, I was pleased by the pacing. The game races forward, asking the player to solve all the possible puzzles in a set 2-3 rooms, then quickly moves on to the next contained area. More than anything else, the design reminded me of the one Mystery Trackers game I've played - and there turned out to be a reason for that, which I won't reveal here for fear of spoiling the plot for anyone playing the game.

While this may not be up to the level of Axiom Butcher, Haunted Hotel: Eternity has a solid story, great graphics, and puzzles that skirt the challenge/frustration line beautifully. As is often the case with Big Fish's modern HOPA games, I can fault the small number and sometimes-awkward justification of their hidden object scenes, but I can't say that the game fails because it didn't get the HOSs right. As the Hidden Object Guru, I'll always advocate for more and better HOSs, but I won't deny that a game does a great job just because its hidden object elements are a little on the weak side. Eternity isn't the best Haunted Hotel game I've played, but it's close, and does the series credit.

Want to see the playthrough that led to this review? It starts in the video below!

Posted by The Hidden Object Guru at 00:35