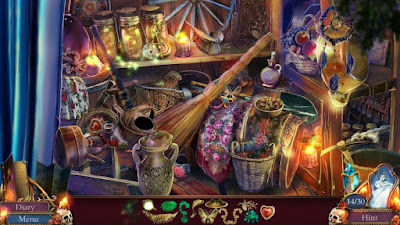 After the Botanist hero's success in saving the Slavic theme park and saving a rare plant in Eventide, it's time for a mountain-climbing vacation with her niece. Her mistake - going mountain climbing in the same region where the first game took place, an area she knows full well is packed with goblins, imps, and villainous magic. Naturally, they're attacked by an evil sorcerer, the niece is kidnapped, and it's up to the heroic Botantist to rescue her, defeat the villain, and save a town all before an evil ritual can be completed!

But how did the hidden object criteria turn out? 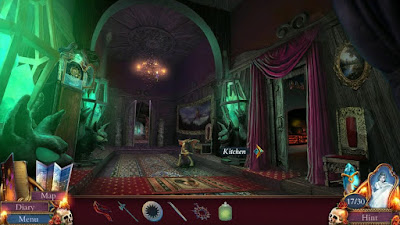 Not in the least. House of fables can be relied upon to generate some of the most attractive and naturalistic HOSs in the genre. With Eventide 2, they keep that reputation alive, offering screens that make perfect sense in context, yet provide considerable challenge. As with all botany and herbalist-themed titles, the developers have an almost unfair advantage, as looking for a certain type of plant in a field of wildflowers is always going to be a fantastic looking HOS. Whether players are combing through bushes for a few flowers, searching desks for keys, or digging into piles of equipment, everything looks gorgeous and completely believable.

It's a roughly 50/50 split this time. The game is half 12:1 screens, with players grabbing a single key item and a bunch of nonsense, and half integrated screens, with a mixture of assembly and botany screens. Using the botany theme gives the developers a head start in logical puzzle design, as it's almost impossible to hide a particular flower in a screen full of foliage in a way that seems contrived or unnatural. Likewise, the assembly screens are a lovely sight to behold, with each random fragment slotted naturally into the environment. Even the 12:1 screens are well-built, with the developers managing to create challenging puzzles without resorting to any kind of cheating.

For the second time, the developers have put together a solid story which allows for plenty of HOSs and puzzles to be logically included. Many of the doors are locked with House of Fables' well-known narrative puzzle scenes, where character backstories are explored through pictorial puzzles - they're never particularly challenging, but they do a great job of offering exposition through gameplay rather than cutscenes, which is always welcome. The game's setting offers perfect justification for strange keys, secret passages, and ornate locks, just as the focus on using herbal concoctions to help people offers good reason to go looking for hidden objects. The House of Fables obviously cares quite a bit about making their games as logical as possible to keep players from ever getting disconnected from the story - and once again, they've succeeded.

There is one wholly new addition that the developers make to this game - a simple morality system that affects the outcome of the story. This isn't a new thing in games, of course, but it's the first time I've seen it employed in a HOG adventure. There are five decision points, in the game, and while none of them are exactly difficult moral choices, it's certainly satisfying to see how each of them pay off when the various characters return for the final showdown with the game's villain.

Eventide 2 is a darker and more serious game than the previous entry in the series. There are still adorable imps, of course, but the game's plot revolves around a man attempting to bring back his dead wife, and manipulating the townspeople of his village by offering them contact with their own lost loved ones. The solid gameplay never undercuts the great story, making this the perfect example of a sequel that completely surpasses its predecessor. Eventide was already a great game, and Eventide 2 is an improvement in every way.

Curious about the playthrough that led to this review? Check out the playlist starting below!

Posted by The Hidden Object Guru at 00:05