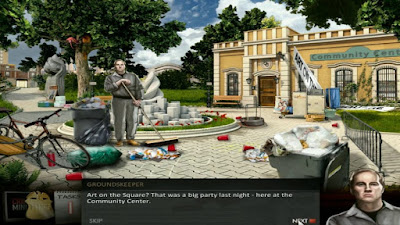 This is kind of a crossover, as in one of my non-HOGuru lives I run the internet's most popular destination for Criminal Minds reviews. Worlds are colliding, though, and it's time for me to put aside my knowledge of (and fondness for) the show and focus on how well it works as a HOG. So, let's join Greg and the gang as they attempt to solve some serial murders! But first, the hidden object criteria! 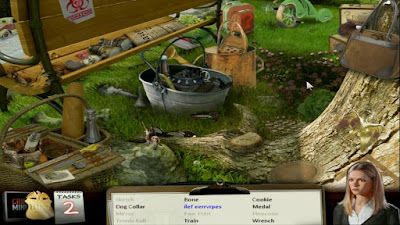 It's a complete disaster. Every HOS in the game is a pile of random garbage dumped on a generic backrgound. It defies realism, logic, or even basic professionalism. There's size, gravity and colour cheating - plenty of pictures that need to be found instead of the items they represent. Every screen is amateurish - with the only interesting aspect being the fact that a few of the items on every screen are anagrammed. Most words will be in black, but some will a mess of blue letters, and it's up to the player to either decode the anagram and figure out what they're looking for or just track down and click on a question mark hidden somewhere on the screen. It's not a revolutionary feature or anything like that, but it certainly does help spice up the otherwise mediocre HOSs.

Marginally. Sometimes players are asked to find 1-3 pieces of evidence amidst a 12-item list, but by and large this is all standard HOG stuff, with players needing to track down an item to open up access to another or get information from a witness/suspect/janitor. These types of searches and results clash badly with the subject matter - these are FBI agents the player is controlling. In the first episode, they're looking for a serial killer who's killed two people in less than a day, in the second episode they're looking for a dirty bomb. Why, in either case, aren't they just taking the things they need, going wherever they want, and demanding help from everyone while threatening them with arrest for obstruction - the way they do on the show? No, it's here in the random item-grabbing that the game feels least like a Criminal Minds experience.

While the HOSs don't really fit with Criminal Minds world, the developers have managed to come up with a number of puzzles that manage to fit the investigative model quite well. Whether players are asked to identify fingerprints, organize evidence, or psychologically interpret art by ferreting out details in it, all of the game's puzzles managed to recreate the feel of simplified policework depicted in the show - and as such, are very successful. The developers have even managed to put together decent substitutes for interviewing and profiling sequences. The former is depicted as a game of taipei, with the removal of certain pieces equating to the opening of a conversational onion, and the latter is a tile-swapping game built around assembling a line of uninterrupted thought - the game even lets players know that they're doing well by having the conversations between the profilers proceed as pieces are snapped into the correct slots.

While the game may drop the ball from time to time as a HOG, looked at as a Criminal Minds game it's everything a fan of the series would hope for. There's a gruesome murder, a lot of nonsensical psychobabble and ridiculous leaps of logic - what more could one hope for? Even all of the actors allowed their likenesses to be used in the game, if not their voices. As a Criminal Minds graphic adventure, it's probably that anyone has a right to expect, I just wish that the HOSs were up to the level of the puzzles, so I could recommend it without  reservation.

Want to check out the playthrough that led to this review? Check out the video below for the first part!

Posted by The Hidden Object Guru at 01:09