There's one bit of the game that still baffles me - you know, beyond all of the stuff about the Guardians and Stillwater Sanitorium that never gets resolved in the series - near the end of the game. When Christine is playing a game of pick up sticks to gather kindling, underneath all of the scrap wood she finds this carved into a rock- 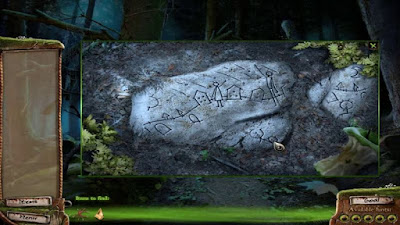 That's a man and a woman watching a meteor shower while standing next to a graveyard. There's also one or possibly two children standing nearby. It's strange because this game features people watching a meteor shower near a graveyard. On one level this is just more art representing the same scene as the sliding block puzzle in the crypt, but its unexplained similarity to a scene in the game is a little strange.

Does it mean anything? Probably not, but it obviously stuck with me. So great work one last time, Campfire Legends.
Posted by The Hidden Object Guru at 22:47