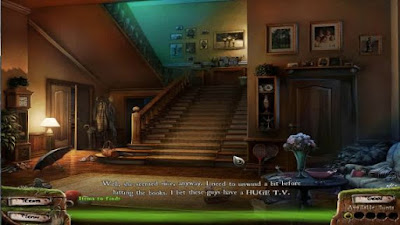 Campfire Legends: The Hookman didn't end on anything close to a cliffhanger - sure, there were unanswered questions about Doctor Haken and his regenerative research, but the only real narrative thrust was blonde girl at the campfire claiming that she has her own spooky story to tell. We never get to hear it, though, as black-haired girl interrupts to reveal that the Hookman story isn't quite over yet, which brings us to maybe the best hidden object game ever. The story follows Lisa, a babysitter in the year 1987, as she's charged with looking after a pair of creepy twin girls for a single night. This shouldn't be a challenge, other than the fact that the house they live in was one part of the notorious Stillwater Asylum where the Guardians ran their terrifying experiments on the unwilling patients. She is obviously in for a long night...

Now, for the hidden object criteria! 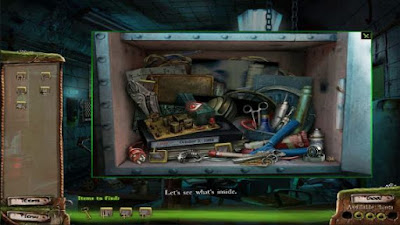 Again, not at all. The developers have done an incredible job of building a believable mini-mansion and secret lab. The first area is cluttered, but in a believable, domestic kind of way. Dishes left all over the kitchen, clothes scattered around a bedroom. Everything looks like the maid took a few weeks off, but beyond that, it's all very plausible. The underground lab looks even better - far more cluttered, but obviously the result of decades of neglect. The Hookman has been working so long that tools and devices have just wound up scattered everywhere. Messy as hell, but it works because the types of items left lying around the labs are internally consistent - there aren't any violins or scattered playing cards lying around, for example.

They are 100% justified, as is the hallmark of the series. This is an especially notable feat, given that the first third of the game is spent just on Lisa's babysitting job. Between fixing broken plates, making hot chocolate, and tracking down stray geckoes, the game does a fantastic job of keeping the setup portion of the game engaging. Things only get better once the horror starts, and Lisa has to assemble machinery and track down mysterious videotapes. That's not all, though - while I can wholeheartedly praise the game's decision to make all of the searches entirely relevant to the plot, the developers clearly understand that sometimes people just want to relax and find some items from a list, so they added a mode for casual enjoyment of the HOG screens. Once the game has been completed players can replay any of the hidden object areas, now armed with a long list of items to locate. It's the best of both worlds!

Fantastically well. The completely logical hidden object scenes are a pleasure to play, and the puzzles fit incredibly well within the world of the game. Are there a few overly elaborate locks here and there? Sure, but they fit well within the horror adventure millieu and never feel like things are being arbitrarily padded out. In addition to the great hidden object and puzzle design, the game's story is a real standout, following Lisa on a harrowing journey into the mind of a madman, all leading to a terrifying conclusion that sets up the third game perfectly.

Campfire Legends: The Babysitter isn't a perfect sequel to Hookman - there are just too many loose ends to be completely satisfying, but taken on its own merits, it's one of the finest hidden object games ever, its success marred only by the decision of the developers to go with a firefly-based hint system, rather than a simple recharging bar. On the upside, it only takes three beetles to skip a puzzle, rather than five, so at least one annoyance was fixed. Especially since there's a much-despised sliding block puzzle just five minutes into the game. Still, this is a hidden object game that's a couple of fixes away from complete perfection, and not many can say that.

I can't recommend this one highly enough - and if you'd like to watch me playthrough the game, just head on over to the Youtube playlist by clicking here!

Posted by The Hidden Object Guru at 00:41