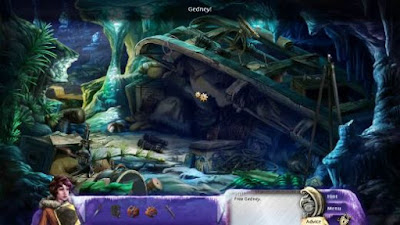 H.P. Lovecraft and the world of hidden object games. I don't know if more of this is available, but if it is, I will absolutely be tracking it down ASAP. Horror and HOG already go together quite well, but it's strange how perfect a fit the eldritch horror of Lovecraft is for the slow-burn of the HOG world. Eerie locations, crumbling necropoles, ancient tomes which need to be pieced back together - this is all a perfect fit for the object hunting gameplay of HOGs. So it's only natural that this particular game has such a solid foundation due to its adaptation of Lovercraft's sole full-length novella, At the Mountains of Madness. The game is a fairly straight adaptation of the story, leaving out the bleaker elements, and adding copious puzzle-solving to the story's more procedural investigation. 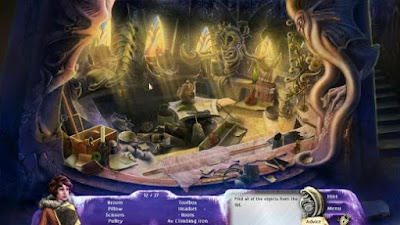 This is a bit of a problem in the game. While for the most part the developers have tried to ensure the items being looked for are things that would naturally occur an Elder City being investigated by a New England university - mapping tools, first aid supplies, and the like. Then the game will throw in some random nonsense just to fill out the scene, such as a violin and untold amounts of household and cooking supplies. It's not an excessive amount, however, and the game is largely good at making sure that everything is an appropriate size and placed in a logical location. A little more annoying is the game's habit of reusing sprites of certain hidden objects from scene to scene - I saw the same sextant more times than I care to count. It's far from perfect presentation, but well above average.

Almost half the time! While many of the game's hidden object screens hold to the standard 'find 3 important items and 20 others' framework, there are a few where the player is simply asked to track down the items they actually need. Whether it's torn pieces of paper or a broken window that requires piecing-together, these departures were always welcome. Also welcome is the game's use of one of my favourite devices - HOG screens which start out cluttered, but gradually find themselves cleaned up as the player is asked to return to them time and again. It's something of a reward for players who play close attention during their first visit to a screen, as they'll have noticed the microscope and filed that information away for when they inevitably return!

A darn fine job - with gorgeous architecture to gawp at, items-filled screens to dig through, and an enthralling mystery to unravel, Mountains of Madness is an immensely engaging journey. Even the puzzles are just the right balance of challenging and accessible. Standard fare, to be sure, but they're well-enough designed and implemented that they never violate the reality of the world. With the exception of a game of 'Collapse' that turns up right at the end.

I can't stress enough how well Lovercraft melds with the Hidden Object genre. At The Mountains of Madness is the most obvious choice for an adaptation, but a surprisingly large number of his stories would be incredibly easy to adapt, and even demand the treatment in some cases. Who wouldn't want to journey beneath the Sphinx as Houdini? Or find themselves shipwrecked on R'lyeth, scrambling for some kind of escape? People looking for more fantastic settings have all of the dream-travelling to choose from. Even something relatively grounded, such as the Case of Charles Dexter Ward could be transformed into a satisfying hidden object mystery more easily than any of the works of Agatha Christie which are so frequently plundered. No, in addition to being a well-above-average HOG, Mountains of Madness serves as a statement that these are great stories just waiting to be told again in a new format.

If you'd like to play along with my trip through the Mountains of Madness, just check out this Youtube video! Near the end, I pitch some other potential HPL HOG titles!
Posted by The Hidden Object Guru at 00:59