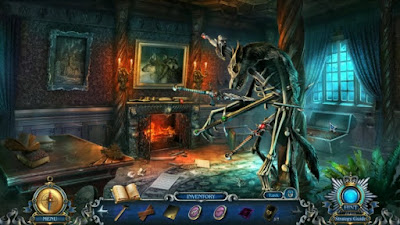 I'm not sure this review can be trusted. It's entirely possible that I love this game far too much for my opinions about its merits to be trusted. What explains this adoration? It revolves entirely around the game's premise, and its straightforward exploration thereof. That premise? What if a group of monsters were all staying at the same hotel, and one by one they began to get murdered - someone would have to investigate, right? Yes, this is the long-awaited game that puts the player in the role of a monster detective. The idea of it fills me with glee - and the game's execution, which has the player tracking down clues and unlocking deduction sequences in which a video plays laying out a theory of the crime. It's the most delightful genre mashup I've seen in ages, and the sheer lunacy of the premise kept a smile on my face for the entirety of the game. 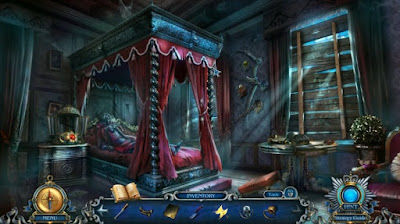 It's barely a problem here. This is the first game in the series developed by Elephant Games, and their expertise was already on display. The HOSs are universally well-drawn, and completely logical. The main character is arriving at the hotel in the midst of a multi-day battle between supernatural armies, so it's completely understandable that things would have gotten more than a little messy. Whether the player is searching a dryad's garden for clocks or a voodoo priest's room for dolls, the HOSs fit perfectly within the world the developers have created. They even use one of my favourite conceits - having the player smash a crate open and then have to search through its contents. Always a pleasure to see that one.

Eclipse focuses entirely on 12:1 screens, so it wasn't exactly pushing the genre forward any. They're well-drawn and fair screens, however, never resulting to size or colour cheating. There's a few questionable placements from a gravity point of view, but beyond that, these are top-notch scenes.

It's a fantastic job from beginning to end. The Final Journey hotel is a huge and layered location, with enormous variety in its rooms. There's a huge library, crumbling tunnels, well-appointed suites, and even a creepy graveyard, because of course there is. It's a monster hotel. The game's puzzles fit the location perfectly - there are dozens of doors to unlock and panels to open, but by far the most interesting element to the puzzle solving is the main character's sidekick, a tiny fire elemental who solves a surprisingly large number of her problems for her.

Perhaps the most amazing thing that Eclipse has going for it is how well it works as a mystery. Each one of the murders that the player can solve has a completely logical explanation, but within each is a piece of a larger story, one that gradually comes into focus over the length of the game. Even the bonus game in the collector's edition is worth the time and trouble to play it, as it offers a nice epilogue and hints at a larger mystery running through the entire series! While I may have gotten frustrated a few times with some of the game's puzzles, and had to hit the hint button more than once when it wasn't entirely clear what I was supposed to do next, I can't find it within myself to weigh Eclipse's minor problems too heavily.

To reiterate, this is a game about solving a murder mystery in which all of the victims and suspects are monsters. To me, and doubtless to others as well, it's a lunatic dream come true, and on some level I can't believe something so amazing actually exists.

Curious about the playthrough which led to this review? Check out the first video below!

Posted by The Hidden Object Guru at 00:39