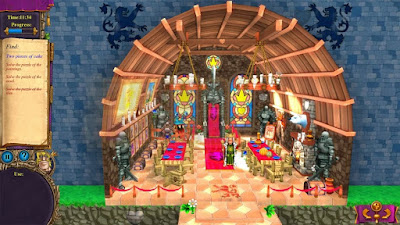 This might be a 'be careful what you wish for' type of situation. I'm often heard wondering why developers don't make more wholly 3D HOGs. While the occasionally game built around polygonal art occasionally turns up, by and large those are still 2D affairs, with art considerably less attractive than their hand-drawn competition. Elementary, My Dear Majesty joins Ferrum Secrets as one of the two fully-3D HOGs I've encountered, and like that title, it takes some interesting and innovative chances while at the same time having enough bugs and strange mistakes that it can't be considered a complete success. 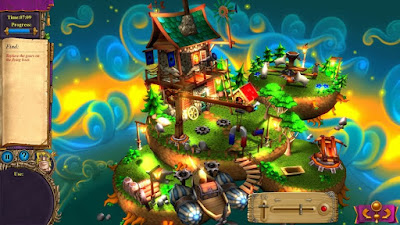 Not as much as it would at first appear. While it's true that every one of the islands that the game takes place on has random objects scattered all over it, the developers do an excellent job of justifying the huge messes. The main character, a troubleshooter tasked with rescuing the King's daughter after she's transformed into a terrifying monster, always arrives at islands in the midst of some kind of upheaval, explaining their rough condition. There's a pirate ship overrun with mutineers, striking natives who want better working conditions before they'll get their oil refinery working, and even a set of asian-themed buildings that the player arrives at just after a ninja attack. The developers even go the extra mile of attemping to justify item positioning - yes, there's some gravity cheating, but for the most part items appear in fundamentally logical positions.

This game is a master-class in search justification. At no point in the game will the player ever be asked to find an item which isn't directly related to the plot. In each new location the player has an overall goal - generally locate a particular item - they'll accomplish by fulfilling the requests of a series of NPCs, who need items recovered and puzzles solved before they'll help the player in return. While many of the requests themselves are flat-out ridiculous, there's always a rock-solid internal logic to them, and the player will never find themselves confused about just why they're trying to pick up a set of butterflies or a pouch full of gold coins.

Actually picking those items up, on the other hand, can be inordinately trying. The developers goofed by not including a proper tutorial mode to explain how this 3D world is significantly different from traditional HOGs - which it absolutely is. While most of the levels have the player looking through a fixed camera angle, some islands can be viewed from a 45 degree angle to either side - this is absolutely necessary, as many items will be completely hidden behind world geometry if the player isn't looking at the exact right angle. Luckily there's a fast-recharging hint button to help players through the rough parts, and two difficulty levels allow players to decide if they want to find all of the items in each group, or just 60% of them. Still, a tutorial designed to ease players into the world would have gone a long way to making my first hour with the game considerably less frustrating.

In addition to the wholly justified hidden object searches, the game offers a few different types of puzzles. These vary wildly in quality. There are numerous sliding block puzzles, which get old very fast, and a number of trial and error pattern lock sequences that are more annoying than challenging. There are plenty of good puzzles as well, though - two standouts being a pair of puzzle rooms in which the player must set off a set of traps. No matter how much the puzzles my vary in quality, they all fit well into the context of the game world, and do a good job of adding a little supporting texture to the hidden object scenes - which may not be a useful descriptor in this case, since every one of the game's screens is packed with hidden objects that need to be found.

As strange as the 3D HOG experience was at times, and as frustrated as I became waiting for the hint to recharge for the last few items every other screen, I was always taken by Elementary. There's enough hidden object searching here to satisfy even the most ravenous clickhound, and the story is a consistently witty affair. While there may not be much depth - or even width - to the story, the dialogue is often humorous, and the developers were able to consistently come up with visual gags and funny situations - some of them even lampooning the game's lack of impressive technology. Elementary, My Dear Majesty was satisfyingly odd, and a good pick for anyone who wants to mix up their HOGaming with something they've never tried before.


Curious about the playthrough that led to this review? You can find the first part below!

Posted by The Hidden Object Guru at 01:01