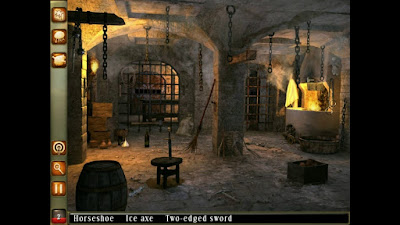 Okay, now this is a strange one. Players control Brad, a reporter searching for his missing wife Janet, who's disappeared during a European vacation. His questions lead him to... Castle Frankenstein. Here's the strange part - that's where the Rocky Horror references end. The rest of the game is a pretty straightforward comedy/horror in which the player tracks down Janet's body parts in a messy castle and then tries to reassemble her corpse using Doctor Frankenstein's bizarre technology. It's equal parts silly and gruesome, and oddly fascinating as a result. Now, on to the hidden object criteria! 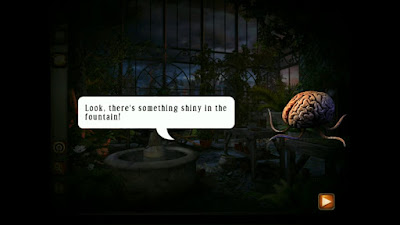 To the utmost. The whole castle is a complete mess, with next to no justification for any of it. Once could make the argument that, what with it being largely uninhabited for some time, the castle has fallen into disrepair, but that wouldn't explain the tools, books, jewelry, and foodstuffs scattered around every location. The screens are also fairly cheap in their construction - lots of size and gravity cheating, not to mention some borderline colouring issues. The one saving grace is that collecting is permanent in the game - players will be revisiting every room in the castle multiple times, and it's extremely satisfying to watch rooms which start out packed with garbage gradually become relatively clean.

It's almost entirely 12-1 screens here. Brad will arrive in a room, be told he needs a tchotchke, then have to tag a dozen other items before he has a chance to pick it up. There are a few justified scenes, however. Occasionally the player is asked to find a series of books on the subject of reanimation, or a set of valuable rings - those screens are few and far between, but they're a nice change of pace when they arrive.

The game's hint system is also a little on the strange side. Players can have a maximum of six hints at a time, obtaining new ones by completing puzzles or finding hidden stars in the various screen. I don't know why developers in the early days of HOGs were so dead-set against simple recharging hint meters, but Dismembered Bride is a perfect example of how oblique item placement and limited hints can render a game more frustrating than it should have been.

While Frankenstein doesn't have what I'd consider a truly strong narrative, it's certianly the most interesting part of the game. With mediocre HOSs, and puzzles that mostly revolve around tile swapping or playing match-3 (which I'm on record as stating has no place in a HOG), the narrative's consistent daffiness at least justifies continuing through to the end. Brad spends the majority of the game wandering around bickering with his wife's shockingly animate brain, and it leads to fairly consistent merriment. They're both kind of terrible - in general as well as to each other - and I was always excited to see just what they'd say next.

Frankenstein: The Dismembered Bride isn't a good HOG. Sloppy screens, dull puzzles, a plot that ends immediately and abruptly just after suggesting something really interesting which is never resolved. There's a real train-wreck vibe to the whole experience. Which is why I have to recommend it at least slightly. It's just so strange that it has to be seen to be believed - and since it's part of a 12-in-1 pack of hidden object games on Steam, the price of admission is startlingly low. Don't go in expecting a good game, though - it's so ill-conceived that it even features parallax-scrolling screens, which is one of the biggest sins a game can commit. It even lacks a map, and since the screens' contents are so arbitrary, players will constantly find themselves wandering from room to room until they stumble onto the next HOS. Just terrible.

I honestly don't even know if I'm legitimately encouraging anyone to play it at this point. But if you're curious about the playthrough which led to this review, you can find it below!

Posted by The Hidden Object Guru at 01:18