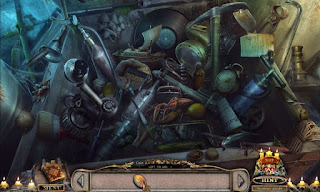 Portal of Evil opens with Vanessa Helsing discovering that her grandfather Abraham has gone missing, and quickly thereafter learning that her family is part of an ancient order tasked with protecting the world from a demon invasion through the titular doorway.  This quest takes her first through the bowels of the fake Vatican, then to a series of ancient times, where the door's seals have been spirited to by a mysterious villain. It's a great premise, and the game makes good use of it, switching from time to time and location to location, ensuring that the player will never have a chance to get overly familiar with a given location.

Now, how about some Hidden Object Criteria?! 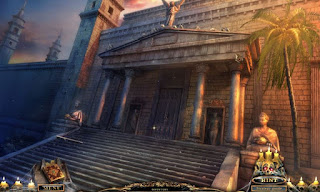 Oh god, it's bad. Really bad. The first screen I came across was set in the garden of the almost-Vatican, and it was just a mess. Random, out-of-nowhere objects tossed on every surface, hanging off of walls, seemingly hovering in mid-air. Throughout the church location, there's screen after screen of items that have no reason to be together in places that shouldn't be messy, dropped on the screen to create a completely arbitrary obstacle. The game does much better with its historical locations, keeping anachronisms to a minimum and developing much more logical item placement. Still, it's about as mixed a bad as one can get.

It's all standard 12:1 gameplay, I'm sorry to report. The screen might be well-drawn, but the developers haven't done a great job of giving me a reason to go scrounging through them. Even worse, its features an object placement screen for every HOS. While I can understand the appeal of these screens in theory, they just don't make sense within the world of the game. Where did I get this armful of items I'm placing with others on the screen? Why on Earth am I doing it? Maybe someday a game will combine these two types of puzzle screens, and have me pick up 12 random items on one screen and then use them to complete 12 broken items on the next, but until they do, I'll keep judging these screens harshly. It's called the HOG genre for a reason, people, and it's not because I'm supposed to be putting angel statues together.

I don't know why, but the angel statues turn up a lot.

It's actually a fairly well-structured narrative. While I may have been hard on some of the HOS design, it's all in service of a good story that moves relatively quickly. Likewise, the puzzles all fit fairly well into the story - Vanessa moves exclusively through ancient hideouts and secretive enclaves, so the elaborate traps and locks all don't come anywhere near stretching believability. Also, the game features two of the easiest puzzles I've ever encountered in the history of Adventures. They're so easy they barely count as puzzles. It's actually quite remarkable.

Portal of Evil offers a strong story with acceptably solid gameplay to support it. The HOSs could have been tighter, and a couple of the puzzles are a little more finicky than I'm used to, but the hint/skip button recharges quickly enough that it's never really a problem. The problem arises in a puzzle that turns up in the bonus chapter - which by the way, isn't really a bonus chapter at all, it's really just the end of the story. I can't stress enough that this game's story, without the bonus chapter, is not complete, and releasing a version of the game without it would just be insane. Back to the problem - there's a keypad-based puzzle that's flat-out broken. Vanessa encounters two halves of the code, but when she enters them into the pad, they don't do a thing. I entered them half a dozen times, but couldn't get a reaction - sure that I'd done something wrong, I finally skipped the puzzle, only to discover that I'd had the right numbers in the right order - the game just refused to acknowledge them for some reason.

It absolutely a decent game and I have no problem recommending it, but don't be afraid to use the skip button here and there.

Check out my playthrough of the game at this playlist!

Also, Portal of Evil is available on Steam!
Posted by The Hidden Object Guru at 01:22