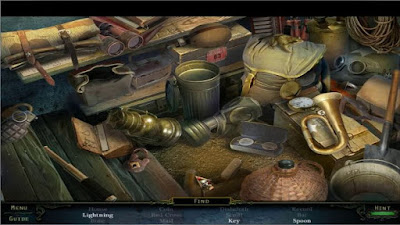 Like so many other games, The Island of Lost Souls opens with a plane crash next to a mysterious lighthouse. Once they arrive at the nearby island the player won't find themselves confronted with zombies, vivisected animals, or the concept of capitalism. No, this time it's an island haunted by the ghost of a murderous spurned admirer, as well as those of his numerous victims. Yes, it's a fairly generic premise, but that's nothing that can't be overcome with solid design. Which, unfortunately, Island of Lost Souls doesn't have to offer. I know it seems as if I was setting up a compliment there, but ILS actually makes a bunch of fundamental design errors that keep it from fulfilling its promise. Also, a bad bit of coding make it possible to accidentally render the game unbeatable. But we'll get there. First, the HOG Criteria! 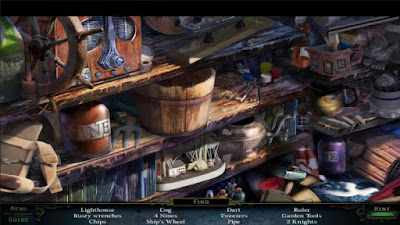 So much garbage, folks, and very little of it makes sense. This is a setting that could easily have justified a few tchochke-filled screens. It's an abandoned island which was briefly a military outpost during the second World War. I can think of any number of reasons that it would be filled with random detritus. Simply designing believable screens around that concept was apparently beyond the developers, however, who pack each screen with random nonsense that couldn't fit the setting less if it tried. Not only are the items in the screens questionable, the developers use every kind of cheat in the bad hidden object toolset - size cheating, transparency cheating, items that float or stick in contradiction with all known laws of physics. These are some sloppy screens, people.

It's standard 12/1 screens this time, with each HOS offering a single item which needs to be used in the story and 11 that don't. To the game's credit, it does a great job of leading players to new HOSs organically. When players find a new item and backtrack to use it an earlier location, they'll often find a new HOS waiting for them on the way. A map letting players know which screens have new activities would obviously be preferable, but this is at least better than hoping players will be fine with aimlessly wandering around until they just stumble onto the next HOS. Unfortunately, the HOSs themselves have an additional major problem in addition to sloppy construction - not only do items found in a hidden object search not permanently disappear, but on return trips to the same screen I was frequently asked to click on the some of the same items I'd just found five minutes prior. In the worst example, I saw five repeat items - a nearly 50% rate. This is just shockingly shoddy work.

While the HOSs aren't especially well integrated, the game's puzzles at least fit the theme fairly well. There's some torn picture re-assembly, a game of Simon, and a few more clever ones I won't spoil. While they're all very artificial, they're unreal in a way that makes sense on a haunted island full of lonely ghosts. The story moves at a brisk enough pace to keep players from getting bored, and nearly everything is wrapped up in a neat little package by the time the credits roll.

I wish I was able to say the same about the bonus chapter which unlocks after the main game is completed, but unfortunately, I was unable to finish it, for reasons that it's important I address now, since my mistake may hopefully prevent another player from stumbling onto a game-breaking bug. Here's the problem - the game's inventory is fairly standard - a bar at the bottom of the screen, which fills up with pictures of items as they're collected. If more are found than can fit on the screen, arrows appear which allow the player to scroll between inventory bars. All fairly standard stuff. Here's the unique feature problem which can cause severe problems: when items from the inventory are used, the rest of the items in the bar don't all immediately shift one block to the left, compacting the inventory the way they do in most games. Why is this a problem? Well, it shouldn't be, except for the fact that if players take an item from the inventory and try to use it incorrectly, the item will then be filed back as close to the start of the inventory bar as possible.

This can cause a terrible result - I had a half-filled first inventory bar, and a single item on the second. I went to the second bar and misused an item - this caused it to be filed away back in the first bar, which I'd expected. What I hadn't expected was that the game noticing that the second bar was empty caused it to turn off the ability to switch between inventory pages - but it did not at the same time automatically move me back to the first page. With the 'switch page' buttons turned off, I was trapped on the second page, which had not inventory items in it. Without the ability to access my inventory, I was left unable to continue the game. This is a fairly serious bug, and as of yet, I haven't discovered a workaround.

So while there are certainly good parts about Haunting Mysteries: Island of Lost Souls, the lacklustre hidden object screens and game destroying bug leave me unable to recommend it.

If you'd like to play along with my journey through Haunting Mysteries: Island of Lost Souls, just check out this playlist! The final part feature my harrowing descent into madness as I realize that I've broken the game!

Haunting Mysteries: Island of Lost Souls is available from GameHouse!
Posted by The Hidden Object Guru at 01:14