Clockwork Tales of Glass and Ink (updated for PS4 release) 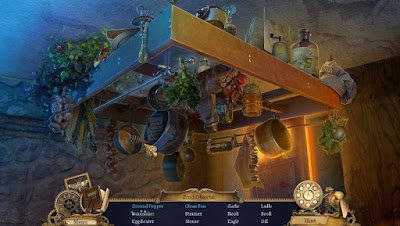 The Glass and Ink there are the main characters, which is more preciousness than I prefer in my titles - but this game is so incredibly winning that I can't help but put aside any misgivings I might have had going in. Set in a fictional European country in the mid-19th century, Clockwork Tales follows Glass as she attempts to rescue her mentor ink from the clutches of a mad scientist with an earthquake machine! To accomplish this task she'll have nothing but her wits, her sticktoitiveness, and a magical mechanical crow who does a surprisingly large amount of the heavy lifting, which is especially strange considering that he doesn't have hands.

Now, on to the HOG Criteria! 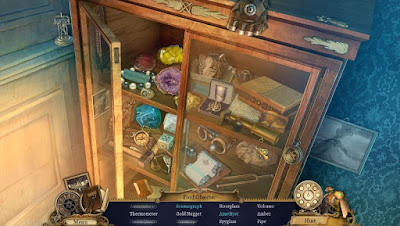 Not in the least. Artifex Mundi always does a great job with building believable HOSs, and this game is no exception. It doesn't feature that many of them, but each one is in a logical location, with a sensible amount of clutter. Enough to be challenging, but never so much that it gets ridiculous. Some standouts include a cabinet full of rock samples, a cluttered kitchen, and a messy guard station. Never in any of them did I question the presence of a particular item. There was a little size cheating, however - unless eight-inch-tall trumpets are a real thing.

For the entire first third of the game, I thought Artifex Mundi had finally gone the extra mile and made a game with nothing but fully-integrated hidden object screens. For the entire time Glass is wandering around a mysterious alpine village there are no arbitrary shopping lists of items that need to be tapped - just item-based puzzles which must be solved by finding hidden objects in quick succession. It works beautifully - other than the fact that during a couple of sequences in which the player is asked to locate various pieces of an item so it can be assembled, the items on the search bar just fade out a little, rather than disappearing entirely once they've been clicked on. This can create some confusion, since 'found' items don't look that much different than the 'lost' ones. It's a minor problem, however, and this move towards HOG integration for a company already at the top of its game.

I was a little disappointed, then, to see traditional HO screens turning up in the second and third chapters. Back was the grid of chaff which needed sweeping away as Glass sought a single useful tool. They're all exceptionally well-built and attractive screens, but after the game spent so much time proving it could do more interesting things, seeing the developers rest on their laurels was a little disheartening.

With a sampling of fully-integrated hidden object screens, as well as puzzles that fit the steampunk setting and old European millieu, Clockwork Tales does and exceptional job of melding gameplay and story. The main character is a professional puzzle spy in a world where such a thing's existence makes perfect sense. The creepy castle, the underground lab - these are the places where puzzles and hidden objects naturally belong, and the game gets the most of its setting.

Having played the game on both PC and PS4, I can safely say that the console is my preferred platform. Clockwork Tales' lushly detailed graphics look fantastic on a big-screen television, and the controller setup is a completely natural way to engage with the game world. The first few times I tried console hidden object games I had some misgivings about using an inexact circle hovering over the HOSs to find objects, as opposed to a precise mouse-controlled pointer. Now that I've played four of them, however, I've found the search circle to be just as easy to control with a mouse. Add this to the fact that inventory management and puzzles are both vastly improved by using a controller, and I can't think of a reason not to think of consoles as the best way to play hidden object games.

Other than the fact that far too few HOGs are being released on them, of course.

With a wealth of top-notch HOGameplay, Clockwork Tales continues Artifex Mundi's stellar run of HOGs. While I'm still a little sad that they refuse to push themselves and attempt a fully-integrated HOG, where every puzzle to solve and item to find is a concrete and logical part of the narrative, it can't be denied that among people working the traditional HOG field, they're the best, and this game is a perfect example of that incredible skill in action.

Clockwork Tales of Glass and Ink is available , and on the Playstation Store!

If you'd like to watch my playthrough of this thrilling adventure, the first video is below!

Posted by The Hidden Object Guru at 22:38