I Am Intrigued by a Mystery Game!

So I follow OWL Hidden Classics on twitter (@OWL_HC) to keep up to date on new HOG releases. Doing so is why I'll soon be reviewing a HOG themed around The Great Gatsby! More importantly, though, there's a 'coming soon' on their website that has me incredibly interested.

Check out their promo video-

A sled dog with a Ruby eyepatch? Digging a stethoscope out of the ice? What could it all mean?

And here's a screenshot of the coming soon page-
That's a ruined Antarctic (or possibly Arctic, but bear with me!) research station, isn't it? Snow cats, pre-fab workspaces, dogsleds... this leads to only one possible conclusion, doesn't it?

An adaptation of all-time great movie The Thing.

Well, okay, not exactly The Thing - after all, the main page promises it's a 'literary classic' - which The Thing absolutely was based on, as anyone who's seen the credits can tell you. John W. Campbell (writing as Don A. Stuart - fun fact - that was his wife's name!) wrote the story 'Who Goes There' which concerns a shape-shifting alien who begins assaulting a military outpost in the Antarctic, turning people into monsters while working on an anti-grav belt to take it to the mainland.

It's the second-best story based on the premise, right after The Thing and well above The Thing From Another World.

So, given my feelings about 'Who Goes There' and 'The Thing', you can imagine how excited I am about the prospect of it getting an adaptation into my favorite genre of game... which makes me a little bit uneasy, since there's a piece of evidence pointing in another direction in the image above- 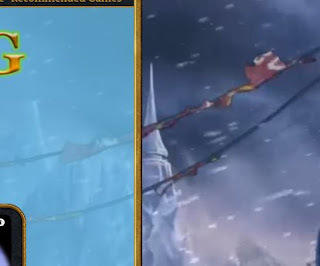 That's a mysterious spire at the edge of the text ribbon. It doesn't look like the architecture of the rest of the buildings, and could easily be an interpretation of the 'strange architecture' which filled the Elder City of 'At the Mountains of Madness'. While this isn't the kind of telling detail that a a giant blind albino penguin would be, it certainly puts a wrinkle in things...

So is it Lovecraft that's being adapted? Is this, given the modern technology depicted, some kind of a 'return to the Mountains of Madness' type of situation? Only time will tell!
Posted by The Hidden Object Guru at 14:32