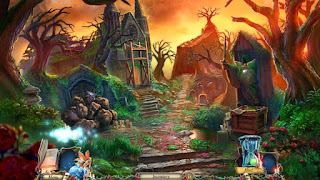 After being so impressed with the Grim Legends 3 beta, I thought it was high time to finally check out this series. This proved to be a solid decision, as Grim Legends: The Forsaken Bride is a top-notch HOG experience in every way. From the opening moments as a bear attack adds excitement to an otherwise humdrum carriage ride, right down to the finale that takes players into an abyss which may or may not be the entrance to Hades, Grim Legends is a top-notch adventure. Great story and art, completely acceptable voice acting, and one of the most satisfying bonus chapters in recent memory combine to make this one of the finest HOGs I've played in a while. 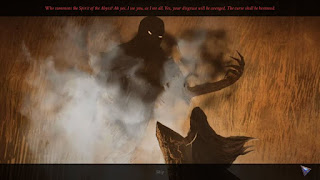 Barely at all. With its locations stretching from run-down forest cabins to long-abandoned castles to underworld pits, GL is very mindful of keeping its Hidden Object Screens as plausible as possible. The screens themselves are also beautifully drawn, with special care to make sure that the hidden objects themselves fit in with the screen around them, so they seem like a natural part of the world. From an art standpoint, HOSs don't get much better than this.

It's a mixed bag here. There are a few object assembly sequences, in which players have to find all of the pieces of a device to be built, as well as some mini-puzzles, in which players are asked to find a series of items and then immediately use them somewhere on the screen to unlock further items. Both are refreshing and stylish changes from the standard 12:1 screens, which also make an appearance. The one place where the game feels unbalanced is in the placement of these different types of screens. The innovative screens tend to crop up in the first half of the game, while the second half is mostly relegated to standard screens. It's almost as if the developers stopped being able to come up with interesting ideas for HOSs halfway through the production, and chose to coast on raw ability for the rest of the game. They're still good searches, but the game would play better if the types of searches had been shuffled throughout the game's three-hour running time.

It's just startling what a great job the developers have done here. It's a thrilling story, filled with twists and turns I won't spoil here, suffice to say that there are a constant stream of reversals, revelations, and schemes that do a great job of keeping players hooked right up until the end. The story is perfectly suited for this kind of game - filled with ancient castles full of special locks and mysterious spirits who need to be foiled through arcane means. What impressed me most of all was how well-told the story was. In addition to to the skilled characterization and solid dialogue, the game does a fantastic job of telling its story during puzzles. Like the GL3 demo, the game features a sequence where the player learns the backstory by interacting with a literal storybook which must be 'solved' by having the player piece together what actually happened. It's a fantastic device, which helps elevate and already great story to further heights.

Grim Legends: The Forsaken Bride is so good that I hesitate to mention the one drawback I came across. The complete backstory of the game is available in a coded storybook that can be checked at any time - the problem is that its story is coded, and the various paragraphs only translate whenever the player manages to locate an 'elusive' item. These are items from the storybook which are placed in every one of the game's screens, which fade in and out every ten seconds or so. These items are extremely easy to miss, and hints are useless in tracking them down. Since they've been tied to the plot, players will likely miss out on some of the finer details of the story, which is a tragedy. This kind of device is a fine addition for achievement hunters and the like, but the developers really shouldn't have hidden away any of their wonderful story from the players, since it absolutely deserves to be seen.

Despite this flaw, however, Grim Legends: The Forsaken Bride remains one of the best HOGs I've played, and absolutely must be sampled by any fan of the genre.

Grim Legends can be purchased from Artifex Mundi!