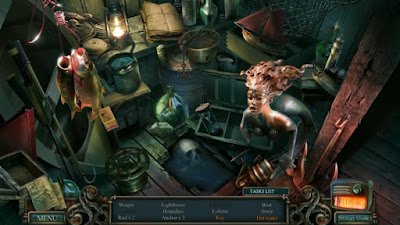 One of my favourite subgenres in HOGS I review are the stealth adaptations. Whether it's a popular video game franchise like Bioshock or a minor literary classic like The Shadow Over Innsmouth, I enjoy seeing how game developers who profoundly don't have the rights to a certain piece of media transform it into a hidden object game. How subtle will they be in their use of locations, character designs, entire plots? Haunted Hotel: Death Sentence is one of the least subtle adaptations I've come across - it's And Then There Were None: The Hidden Object Game, and it's actually fairly spectacular it hews to the book's storyline - actually making a little more sense here and there than the original did. 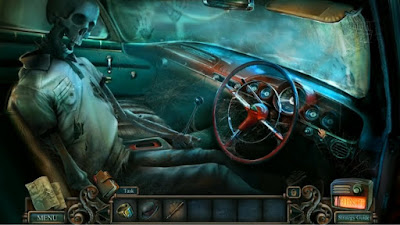 Barely at all. This, like most of the Haunted Hotel titles, is an Elephant Games production, and as such it's made by people who care about the logic of their HOSs. The game's setting is a crumbling hotel on an isolated island, where the player has been called by frequent crime-solving partner James to help him determine the party responsible for a series of disappearances. The hotel has seen better days, so it's largely believable that there would be piles of sundry items scattered around all around the place. Especially since the maid is one of the killer's victims!

It's strictly 12:1 screens this time around. They're fairly designed, and frankly, pretty gorgeous, but story integration just wasn't a priority. The game features many examples of the signature Haunted Hotel design scheme - bouncing back and forth between a couple of screens as a series of locks open matryoshka-like. A few of the key items are found in the hidden object scenes, but by and large the game is more concerned with its puzzles and graphic adventure elements than the HOSs. Players generally search each screen just once, and there aren't any examples of the game livening things up or taking chances with the formula.

And Then There Were None is the original slasher mystery, and this game does the story justice. The timeline has been shifted so that the killer was able to go after their victims on a longer timeline, and the plot takes a few original turns towards the end, but overall it's a surprisingly faithful adaptation of the source material. Many of the puzzle locks are a little on the contrived side for the setting, but overall I found the execution convincing and eerie - there are even a few ghosts on hand, which is a surprisingly rare occurrence in the franchise, considering its title.

Haunted Hotel: Death Sentence is a solid capper to the second HH trilogy. Some of the text is a little sloppily translated, but beyond that it's an incredibly polished package, and one of the high points of the franchise. Even the bonus chapter available in the collector's edition is top-notch, providing another solid 40 minutes of content, an intriguing look at an even more dilapidated version of the hotel, and a satisfying wrap-up to the story. While this game never reaches the insanely masterful heights of HH: Eclipse, it's a solid effort, and fans of both the series and the original novel will both be entertained.

Curious about the playthrough that led to this review? Check out the video below!

Posted by The Hidden Object Guru at 00:56