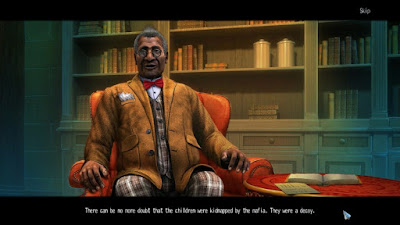 The year: 1955. The situation: mobsters are being abducted by clouds of green fog, leaving patches of swamp and a single butterfly on the ground where they'd stood a moment earlier. Also, children are disappearing at the same time, leaving behind drawings of the exact butterflies that showed up at the mobsters' feet! Who could hear about that mystery and not want to see it immediately solved! Certainly not I, so let's move right away into the hidden object criteria! 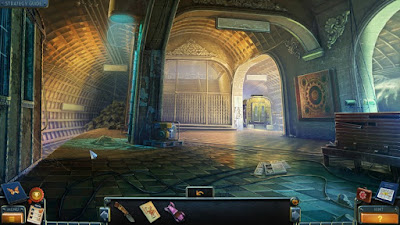 Not at all. These are the cleanest hidden object screens I've ever encountered. Whether players are in an office, a subway car, a diner or a university lab, there are only as many items on display as there would logically be in that place. This is artistry in HOSs that is rarely seen - although it does border on being too much of a good thing. The screens are so completely lacking in clutter that finding the necessary items would be scandalously easy if players were just given a list to pick from. They aren't, though - instead, players are presented with a set of silhouettes that do a remarkably poor job of representing the items that players need to find. Sure, keys are always easy enough to pick out, but beyond that, the shapes are weirdly unhelpful - I'll make a ruling right now - if developers having two methods of adding challenge to their game: adding a little clutter to scenes or asking players to identify silhouettes, go with the clutter six times a week and twice on Sundays.

They are completely justified. The HOSs are exclusively fully-integrated mini-puzzles, with the player asked to find a series of items within the screen to unlock or reveal items, until they've run through the whole list and wound up with the key item. This is one of the best types of HOS possible, and it's one of the most challenging to produce, which likely explains why the game is so comparatively light on hidden object screens. NYM focuses more on graphic adventure content - grabbing items and using them on other screens - than the HOSs that the developers craft so well. It's a bit of a pity - while everything about the game is first-class, I couldn't help but wish that there had been a few more HOSs, just so I would have a chance to see developers working at close to the top of their game.

Again, the developers knock it out of the park on this one - the three factions making moves in the game's story are the mafia, supernatural forces, and a secret group of mystery solvers - any of these would naturally be proficient in and partial to building devious caches and hiding keys in preposterous places, making the whole plot flow far more logically than is often the case in this type of game. Pacing is one of this game's strongest suits - the pieces of the mystery are parcelled out at just the right times to keep players hooked, and the locations they're led fit perfectly with the story being told - whether they're at a museum, deep beneath the city, or wandering around a mysterious swamp, each setpiece flows logically into the next. All of this is helped along by one of the best maps I've ever encountered in a HOG. Not only does it keep the player apprised of which screen there's something to accomplish in, the developers have noted which screens have collectibles and beyond objects in them, ensuring that a player will never be in a position to miss an item if they're interested in unlocking all of the achievements.

New York Mysteries: Secrets of the Mafia is a top-notch game in every respect but one. The puzzles are well-thought out, the art is peerless in its beauty, the story has just one borderline plot hole. Really, it's an incredible accomplishment. If only the HOSs weren't so few and far between, and if only they used lists instead of silhouettes this would be in the running for one of the best HOGs I've ever played. Even without that achievement it's an amazing game that's not to be missed for anyone who enjoys HOPAs.

Curious about the playthrough that led to this review? You can find the first part below!