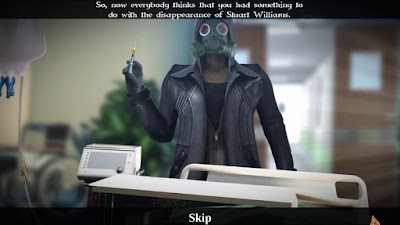 At the end of the first Demon Hunter game the stakes were clearly set - the main character had been ushered into a new world full of supernatural dangers, as well as an ancient battle which she was the only one qualified to fight. That's one heck of a way to kick off a franchise, which is why it's so puzzling that Demon Hunter 2: New Chapter picks up the story some 20 years later, after she's already become a world-famous demon hunter who's had countless demon fighting adventures that go basically unmentioned. Why would the developers skip over all of that content? What story was so important that they skipped over decades of adventures to tell it? Oddly, it's the return of the demon from the first game - who the main character has already defeated once (and without too much difficulty, really), rendering him less of a threat than I think the developers were hoping.

On to the hidden object criteria! 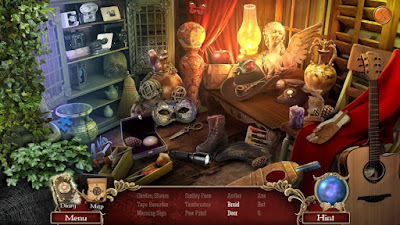 It's pretty bad. The game is set in largely realistic locations - offices, mansions, hospitals, a dungeon complex, and the developers have taken those areas and absolutely littered them with completely random and nonsensical assortments of items. While there are a few token attempts at building a theme - a hospital hallway might have a microscope and oxygen tank - generally very little care is put into making the items on display make sense. That same hospital hallways also contained a feathered mask, antique compass, and lace doily.

Not in the least. Demon Hunter 2 has a few different kinds of visual puzzles - including a couple of fun 'build a Rube Goldberg machine' sequences. By and large, though, the game is made up of traditional list-based searches. Interestingly, these are universally, drawn from the rarest subtype of hidden object screens, the elusive 12:0 screen. In normal 12:1 screen the player is asked to find everything on a list of items, and one of them will be the item they use to solve an environmental puzzle elsewhere. This creates a figleaf in-world justification that the player is 'cleaning up' the screen so that they can find the thing they're looking for. In 12:0 screens, players are given that same list, but once all the items have been identified and ticked off the list, they're handed a wholly unrelated item that they weren't told about. Not only is this strange from a storytelling point of view, it's weird from a design standpoint - it makes it seem like the HOSs are being built without any consideration of the game that they're going to be placed in - after all, how hard is it to draw a puzzle piece or sledgehammer into an already cluttered mess of a screen?

Demon Hunter 2 actually holds together pretty well. I've been hard on the premise and the slightly shoddy HOSs, but as a story and an adventure, it's a very well-made two hour quest. It's full of puzzles that fit naturally in the world - starting a helicopter and examining chemicals are transformed into logic puzzles, for example, and the actual plot developments are interesting enough that I was eager to discover the identity of the game's masked culprit. I'll say this for the game - I've played a large number of HOGs now, and this is the first one in which players are twice attacked by RPG-wielding foes.

Like its predecessor, Demon Hunter 2 is a perfectly solid HOG. There's nothing as delightfully odd as that game's 'surprise' villain - a drawing of Re-Animator era Jeffrey Combs who regularly teleported away in a cloud of black smoke - but it's still a worthy sequel. The key elements are all there - demonic conspiracies, injured animals that have to be rescued, and an impressively large number of hidden object scenes. This isn't the best game that Artifex Mundi has published, but it's certainly worth a look.

If you'd like to see the playthrough that led to this review - it starts here:

Posted by The Hidden Object Guru at 22:57