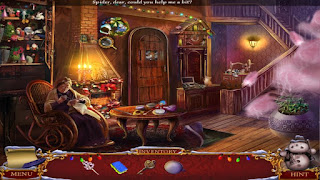 Set in and around a tourist park deep in the woods of eastern Europe, Eventide casts players as a botanist attempting to help out her grandmother by using her expertise to help preserve  an ancient and mystical flower. This leads her on a journey through an ancient forest populated by colourful mystical creatures, and, of course, a variety of puzzles to solve and items to construct. While the premise may be a little on the generic side - grandma's in trouble, magic will help! - Eventide wins a lot of points with its high-quality character and art design. It may not be breaking any new ground from a design standpoint, and one mini-game is lifted whole cloth from Grim Legends 1, but it's still a solid example of the genre. 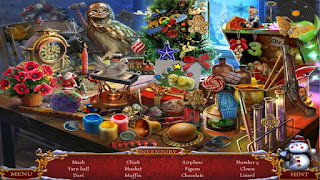 This isn't a huge problem this time around. As with other games in the 'magic botany' series that both this and Grim Legends delve into, Eventide excuses much of the artificiality of HOSs by having the player search for specific plants in overgrown pastures. When things turn more traditional, the game also does a good job of building locations where HOSs are likely to happen. There are crumbling tourist attractions, neglected castles, and the hovels of mysterious woodland creatures. A little clutter is to be expected.

The game is acutely aware of this issue, to a fault in the late-game offerings. To start with, the game tries to avoid the issue entirely by simply not having many hidden object screens in its first half. Eventually they start appearing, but other than the many examples of plant picking, they're almost entirely 'construction' HOSs, a favourite of the teams of developers working with Artifex Mundi. Building items always makes a lot of sense, so I was a little disappointed when, right at the end, the developers try to make standard 12:1 screens just as relevant to the story by establishing them as 'mosiac' searches, in which 12 pieces of locking mosaic are hidden in a cluttered screen, and the player is given the names of the 12 other items they're hidden behind. There's nothing wrong with this conceptually - it's not as good as fully integrated HOS, but it's always nice to see innovation - but the way the mosiac pieces tend to be larger than the items they're hidden behind makes the whole thing feel like an afterthought. It's as if the developers had gone most of the game without any simple 12:1 screens, and then decided right at the end that they wanted to keep the streak going, with incredibly mixed results.

Pretty well. The minigames are surprisingly fair - it's rare that I get through a game without skipping something, and the fact that I never had to means that by and large the puzzles respond well to basic logic and a willingness to hammer away at a problem until it just gives up. They also do a good job of fitting the game's world and tone - this is a forest of magical creatures and an evil castle run by monsters, of course there are going to be elaborate multi-stage locks to crack. One problem crops up towards the end of the game as the various objectives get a little more generic and less memorable, it can be easy to lose track of where a particular item needs to be used. Add to that a map which tells players where there are current puzzles to solve, but only points them to a general area, rather than a specific location, and the result is enough frustration to drive anyone to the hint button.

While not up to the stellar levels of the Grim Legends series, Eventide is quite charming on its own terms, and deserves to be mentioned in the same breath. The demo for Eventide 2: Sorcerer's Mirror convinced me to give this game a try, and I wasn't disappointed by what I found. A few misbegotten design choice here and there can't hold back an overwhelmingly decent game, especially one with one of the most satisfying prequel bonus games I've played in a while.

Check out my playthrough of the game at this YouTube Playlist!

Eventide can be purchased from Artifex Mundi!

Posted by The Hidden Object Guru at 00:43