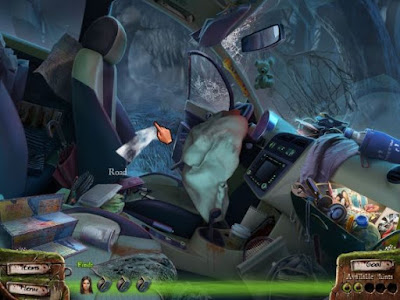 The Campfire Legends series comes to a close with The Final Act, which came years after the first two titles in the series, explaining the slightly strange way it opens. Much like the last in the series, The Last Act picks up exactly where the last one left off, with Maggie gazing at her friends with sinister intent. When players take control of the game they're put in charge of Reggie, who hasn't gotten over the way her sister Lisa disappeared fifteen years earlier. So naturally she's a little on edge when driving past the mansion where everything went down - then a ghost appears in her path, causing her to crash the car! It's time for another long night at the Stillwater Sanitorium, with this one hopefully wrapping up all the loose ends!

Now, for the hidden object criteria! 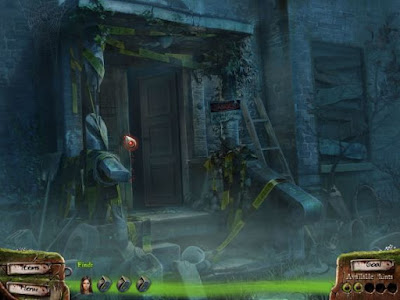 Not in the least! Again, the developers have done a great job in dressing the various hidden object screens to look like naturally dilapidated rooms. From a crashed car, to a crumbling study, to an underground lab, all the way to Maggie's cabin, everything is perfectly grounded and realistically cluttered. In an especially nice note, the developers take the players on a journey back through familiar locations from the first two games. Some locations are more successful than others - while the mansion screens are beautiful, it doesn't look like the same location as in Babysitter - I was amazed at how well the revisited cabin from 'The Hookman' turned out. It really did feel like coming back to an old haunt.

Once again, the superb hidden object design really sells the experience, with the players only ever having to look for specific items to solve specific problems. This is the last Campfire Legends game, so it's important to appreciate this triumph of design while it lasts. Unfortunately, the developers made a huge blunder in the post-game mode - instead of another Haken's Journal mode which lets players try their had at grabbing a variety of items in the HOG locations, The Last Act offers 'Project Stillwater', a disaster of a 'spot the differences' game. It's bad enough that they included this instead of a traditional HOG bonus mode, the fact that the screens are pitch black and lit by a flashlight, forcing players to look for differences in just a twentieth of the screen at a time is inexcusable.

It's another great showing from the Campfire Legends people - the puzzles are, despite the inclusion of a sliding block abomination, a lot of fun, and fit the location and theme quite well. The story is also well up to series standards, with only one strange error on the part of the developers. Even though anyone playing the game should know that Maggie is the villain, since that was the whole point of the last game, the game is oddly coy about revealing her as such. Early in the game Reggie finds Lisa's captivity journal, and in it the babysitter bizarrely refers to her captor as 'it', rather than 'her' or 'Maggie'. The whole thing is structured to protect a reveal that isn't anything close to a secret. Even someone who hasn't played the previous games would immediately know Maggie is the villain, especially since the first thing she does in the game is give the other girls at the campfire mugs of obviously drugged hot chocolate.

It's a strange conceit that hampers the story a little, since it spends a good amount of its running time building to a fait accomplit - nevertheless, it's a solid tale of terror and the brave young woman who alternately flees from and stands up to it. Even the still-terrible firefly-based hint system has been tweaked to be slightly less awful! Now instead of spending beetles to skip puzzles, a skip bar gradually fills, just like in every other HOG! Also, when Reggie runs out of fireflies, an extra one will gradually regenerate in her inventory to help the hopeless. The hint regeneration time is absurdly long, though, more than twice as long as the 'skip puzzle bar' charge-up, once again making me question why the developers hated casual players so intensely.

While The Last Act doesn't function as a satisfying conclusion for the entire series - we're left with plenty of questions from The Hookman - when looked as a continuation of The Babysitter, it's a great resolution. The Babysitter had quite a nasty cliffhanger, and even though I had to wait years for this game to follow up on it, I wasn't disappointed. Whatever problems it may have as a game - hint system, bad bonus material - The Last Act is a great capper for the best trilogy in hidden object gaming.

This is another HOG that absolutely demands to be played - and if you'd like to watch me do just that, head on over to the Youtube video of that happening!
Posted by The Hidden Object Guru at 00:44